Sen. Kelly Lynn Loeffler and Rev. Raphael Warnock faced off in a debate ahead of the runoff.

ATLANTA - Sen. Kelly Loeffler repeatedly refused to acknowledge that President Donald Trump lost reelection in November, as she debated her Democratic opponent, Rev. Raphael Warnock, ahead of twin Georgia runoff elections that will determine which party controls the Senate.

Asked specifically about President-elect Joe Biden’s victory in Georgia and whether she agreed with Trump’s unfounded accusations of widespread voter fraud, Loeffler sidestepped the matter during a debate Sunday.

Although Trump has lost round after round of court challenges in Georgia and other battleground states, and Georgia’s results were certified last month, Loeffler described Trump as merely pursuing “every legal recourse.”

She alleged, without any supporting details, irregularities in the November elections, prompting Warnock to chide her for “casting doubt” on a legitimate election in an effort to appease Trump and his supporters. 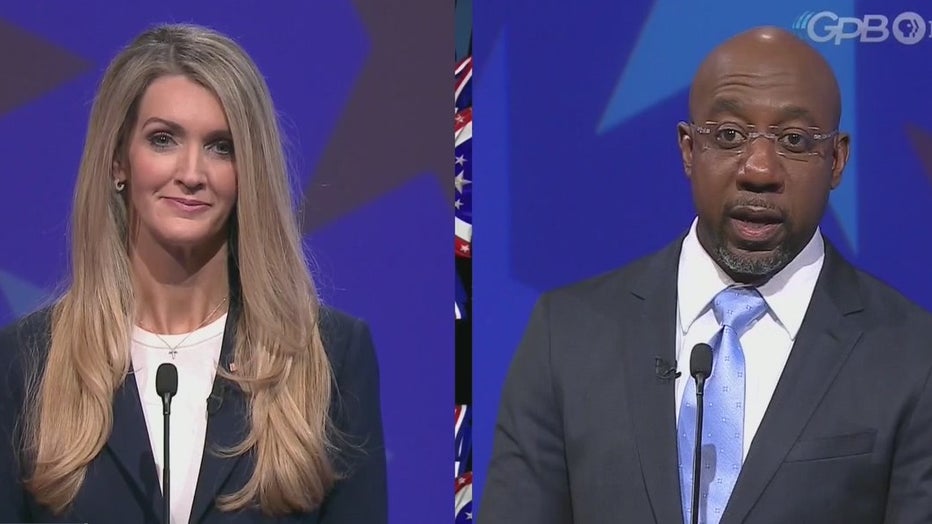 “The people have spoken on the presidential election, and they’re waiting on their senator to be focused on them, not the person in the White House,” he said.

The exchange came as a top election official in the state accused Trump and his allies of spreading falsehoods and leading Republicans said they worried that unfounded attacks on the election system could depress turnout in the Jan. 5 runoffs.

But Loeffler steered clear of any criticism of Trump, even as she tacitly acknowledged his defeat. Her victory is necessary to prevent a leftward march under complete Democratic control in Washington, she said.

“Everything is at stake in this election, the future of our country,” she said, warning of a range of liberal and progressive policies that could never become law if Trump was in the Oval Office.

More than a dozen times Loeffler blasted “radical liberal Raphael Warnock” and hammered the pastor as a socialist who would ensure everything from a government takeover of the U.S. healthcare system to the seizure of Americans’ guns. Warnock, who is not a socialist, countered by blasting Loeffler as a self-interested, uber-wealthy politician who “lied not only on me, but on Jesus” by highlighting and, he said, misrepresenting excerpts of his sermons.

The battle between Loeffler and Warnock and a second runoff between Republican Sen. David Perdue with Democrat Jon Ossoff will determine which party controls the Senate at the outset of Biden’s presidency. Republicans need one seat for a majority. Democrats need a sweep to make Vice President-elect Kamala Harris the tie-breaking vote.

The debate came a day after Trump campaigned in Georgia alongside the two senators. The president repeated his baseless claims that Biden’s victory in Georgia and nationally were due to fraud.

Political analysis of the Trump campaign in Georgia

Georgia officials are on the cusp of completing a third count of about 5 million presidential ballots in the state, with Biden already having been officially certified as the winner despite Trump’s protests.

Gabriel Sterling, a top deputy to Georgia’s Republican secretary of state, said on NBC’s “Meet the Press” earlier Sunday that Trump and those echoing him are undermining democracy with deliberate falsehoods.

“At this point, it’s a game of whack-a-mole” Sterling said. “They are stoking anger and fear among his supporters. And hell, I voted for him.”

“The mountains of misinformation are not helping the process; they are only hurting it,” Duncan said.

While Loeffler dodged inquiries about Trump’s defeat, Warnock avoided saying whether he’d support expanding the Supreme Court, a priority for some progressives. He said he was more interested in coronavirus pandemic relief, but never answered explicitly whether he was opposed to adding justices.