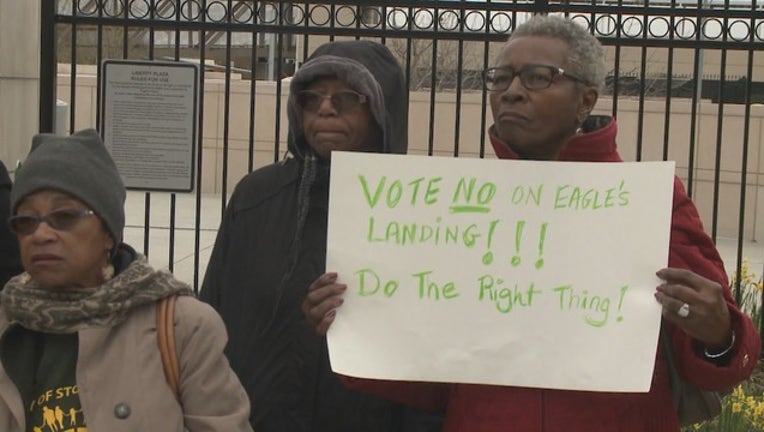 ATLANTA (AP) - The city of Stockbridge is one step closer to being cut in two after the Georgia Senate gave final passage to a proposal allowing a new city to be carved from it.

The proposal, which passed, 33-19 late Thursday, would incorporate the city of Eagles Landing, including some land that's currently in Stockbridge.

Proponents say the bill will give residents the right to self-determination, but Democratic Sen. Emanuel Jones, who represents portions of Stockbridge, said the legislation would destroy the community and pit neighbor against neighbor.

Residents pushing for the new city say they are driven by a desire to get better city services, increase property values and attract high-end businesses.

The Eagles Landing Educational Research Committee, a group of volunteer citizens advocating for Eagles Landing, say the new city is needed "to maintain property values (through) tough Code Enforcement, enhancing the overall ambiance of the area and having a smaller and more responsive government."

Opponents say that the move is racially motivated and point to language about "demographics" used to justify the split.

Stockbridge, approximately 20 miles southeast of Atlanta, is predominantly black, while Eagle's Landing would have a greater proportion of white residents.

The bill now goes to Gov. Nathan Deal. If he signs it, voters in the area that would become Eagles Landing would need to approve the idea before the new city is formed.

The creation of Eagles Landing would not immediately impact public schools in the area because they are run by the Henry County Board of Education.