Lawrenceville police are searching for a motorist who was caught on camera setting a fire in the middle of a busy intersection.

LAWRENCEVILLE, Ga. - Bystanders recorded a shocking scene, as a man stopped at a busy intersection, set a fire in the roadway, and then drove off.

Lawrenceville police shared the video stunned motorists recorded as the bizarre scene unfolded in the intersection of Highway 124 and New Hope Road at around 1:30 p.m. on May 4.

Lt. Jake Parker told FOX 5's Deidra Dukes, "The man exited his vehicle, and took a bunch of items out of his car, sat them in the roadway, doused them with gasoline, lit them on fire."

Lawrenceville police are searching for a man who they say started a fire on Highway 124 and drove off. Police released a photo of the charred items the man set on fire: a red fabric banner marked Benjamin, a small U.S. flag and an animal horn.

Police released a photo of the charred items the man set on fire: a red fabric banner marked Benjamin, a small U.S. flag and an animal horn.

"I have no idea what the significance of the intersection was, other than it had a pretty good audience, a lot of people around and it doesn't appear it was directed at law enforcement, but it does appear he had a message of some sort," said Lt. Parker.

That message remains a mystery to law enforcement. Any statement the man may have made wasn't captured in the videos because witnesses recorded them from inside their vehicles.

Lawrenceville Police believe the man was driving a Chevy Equinox or a similar type SUV.  The vehicle was silver or champagne in color. Investigators recently posted the images on social media in hopes someone will recognize the man and help investigators track him down. 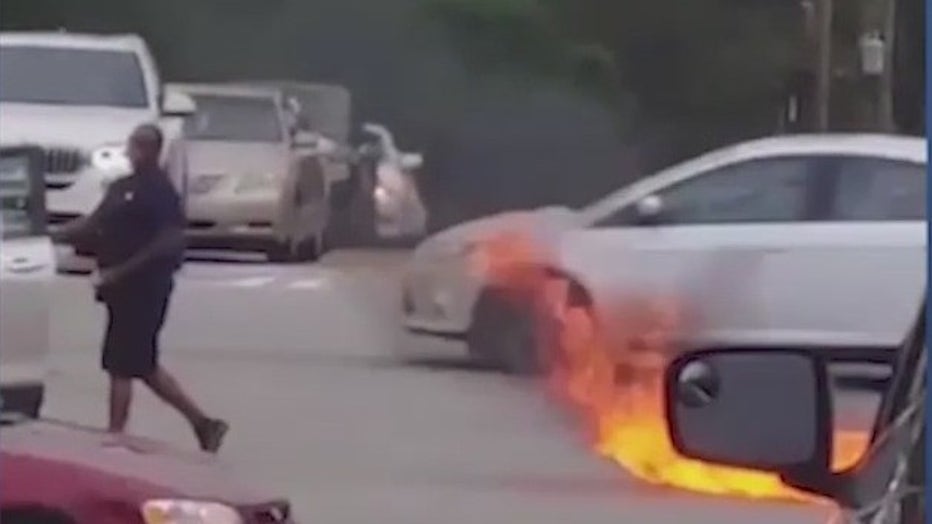 Lawrenceville police are trying to locate a man caught on video setting fire to items in the middle of a busy roadway.

"One of the social media messages was someone thought they recognized the man in the video", said Parker. "They believe he is someone who has mental problems, and if that's the case we would like to get him some help versus doing something like this and endangering the public."