"I want my community to know that we are not that way,” Douglas County Sheriff Tim Pounds explained. “If one of my officers do something, I don't sweep it under the rug. I hold him accountable."

Douglasville, Cobb County, and Union City Police were among the agencies to talk about policing methods and their response to community complaints.

"We believe in de-escalation,” Chief Gary Sparks of the Douglasville Police Department said. “We train that way. Everybody going around talking about chokehold. We don’t even do no chokehold. We have don’t chokehold."

They wanted to address their commitment to addressing improper and illegal behaviors within law enforcement.

Tuesday afternoon, President Trump announced his executive order regarding police reform which includes tracking officers who have excessive force complaints and sharing the information among departments. 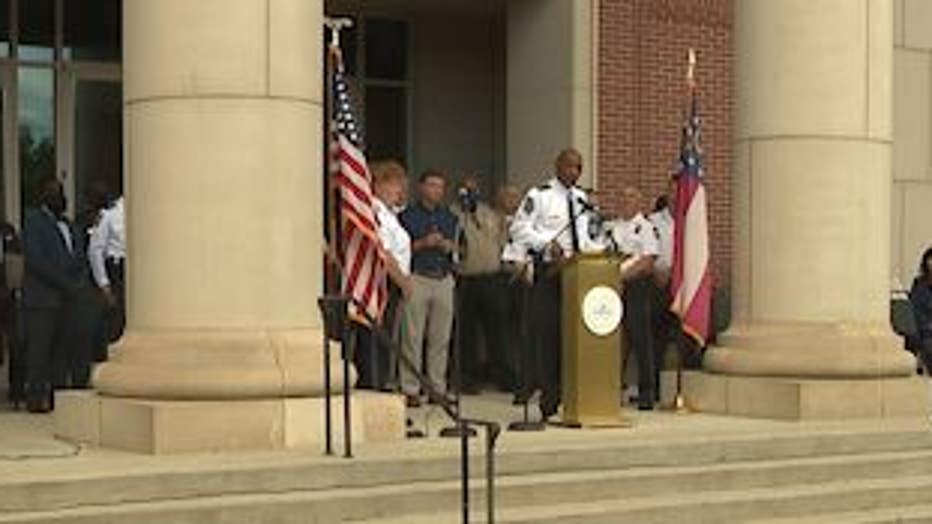 Chief Sparks gave his reaction to this order.

“When people talk about we just hire people. We don't do that. We do background checks, we do psychological, we go back to where you're from,” Chief Sparks detailed.

The departments brought up recent instances of people who died in police custody, mainly the killing of George Floyd in Minneapolis.

"I know what happened 1,100 miles from here is awful,” County Sheriff Gary Gulledge mentioned. “There ain’t a cop that I have seen anywhere that likes anything they've seen but that ain't happening here in our community."

Deputy Chief Scott Hamilton of the Cobb County Police Department said to the crowd that “when I wake up in the morning - first and foremost, I’m a black man. I understand some of the pain that a lot of the citizens are going through."

Along with their own efforts, leaders also ask citizens to do what they can to help to improve the relationship between law enforcement and the community.

"We don’t get out the car cursing you. We don't get out asking you a lot of silly questions. Ma'am, sir - can i see your driver's license,” Sheriff Pounds mentioned.

Both Chief Sparks and the Mayor of Douglasville made it clear their police policies do not include any choke-hold or knee to the neck practices when taking someone into custody.

You can see the Mayor’s statement here.