Gov. Brian Kemp gave the State of the State address to the Georgia Legislature on Jan. 14, 2021.

ATLANTA - Gov. Brian Kemp recognized an Atlanta police officer injured during this summer’s protests and the Georgia National guardsman who saved his life.

"Atlanta Police Officer Max Brewer is an 18-year law enforcement veteran and a self-described "Motor Man for Life," and serves in the Atlanta Police Motorcycle Unit," Kemp told a special joint session of the Georgia General Assembly on Thursday.

Atlanta Police Motors Unit Officer Max Brewer was helping to block traffic at the intersection of Marietta and Spring streets on the evening of May 30, 2020, for a demonstration. Around 10:30 p.m., a speeding ATV struck him, flipping him in the air, and causing him to land on his head.

"I got back to my traffic post. I noticed an ATV going up and down the street. We ignored them. Whatever reason came back up and decided to run right into me. After he hit me I was knocked unconscious," Brewer told FOX 5 back in August after being released from the hospital. 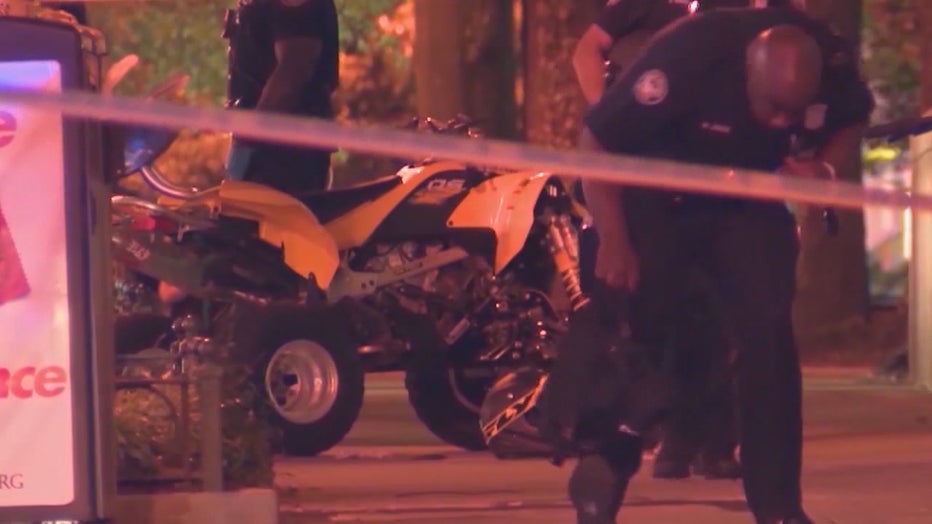 An ATV rider struck an officer blocking traffic in Downtown Atlanta during a protest on May 30, 2020. (FOX 5)

A nearby Georgia National Guard medical unit was able to quickly stabilize the officer so he could be quickly rushed to Grady Memorial Hospital.

"Going in and out of consciousness and losing a significant amount of blood, Officer Brewer’s need was critical. The call went out for help. The closest available assistance was a Georgia National Guard unit under the leadership of Sergeant First Class Jason Rustin," Kemp explained during his State of the State on Thursday. "Sergeant Rustin’s team responded quickly to the scene, applying a tourniquet to Officer Brewer’s leg and providing lifesaving medical treatment at a moment’s notice. The actions of Sergeant Rustin and his fellow Georgia Guardsmen literally saved Officer Brewer’s life."

"Everybody said it looked bad. They didn't think I was going to make it," Brewer told FOX 5 back in August. "Both legs, broken completely. Left leg sustained more injury. Damaged more nerves and arteries in this one. So this leg is worse than the right one."

Brewer said he was unconscious for more than a week after being struck. After several surgeries, he was released from the hospital in early August but is still recovering and was not able to attend Thursday's recognition from the governor.

"Both Sergeant Rustin and Officer Brewer went above and beyond that call, and for that, my family and our state are incredibly grateful," the governor concluded.

Rustin was in the chamber on Thursday and on Friday, the Atlanta Police Department publically thanked him for his service in a post on their Facebook page.

"There are not enough words to thank the National Guardsmen and Sgt. Rustin for saving our brother in blue. We are eternally grateful for all that they did for us. We also thank Officer Brewer and all the men in women in uniform who went above and beyond the call of duty during the long months of the summer and for all they do each day," the Atlanta Police Department wrote on its page. "We appreciate Governor Kemp’s recognition."

Officer Brewer is now about eight months into what will be at least a full year of recovery until he can walk on his own two feet again. He continues to go to physical therapy and is working on getting his full strength back.