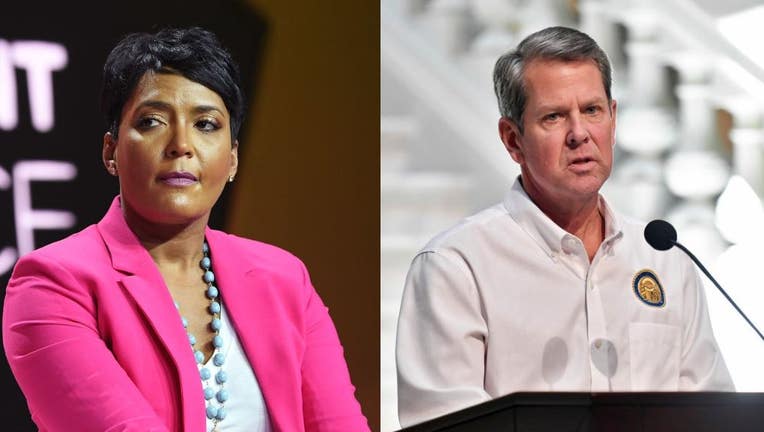 ATLANTA - Georgia Republican Gov. Brian Kemp responded on Monday to Atlanta Mayor Keisha Lance Bottoms blaming the city's crime spike on the GOP-led reopenings during the coronavirus pandemic, stressing that people are "tired of leaders blaming somebody else for problems that they have in their own jurisdiction."

Bottoms blamed the crime wave in her city on lax gun laws, young people being out of school and the Republican governor’s decision to make Georgia one of the early states to begin reopening.

Asked if officers have been "hesitant" to respond to crime amid heightened tensions of the past year, Bottoms said "absolutely not."

"Remember in Georgia, we were opened up before the rest of the country, even before the CDC said that it was safe for us to open so our night clubs and our bars remained open so we had people traveling here from across the country and partying in our city," Bottoms told MSNBC’s Stephanie Ruhle on Friday.

Kemp responded on Monday by noting that "plenty" of other states like Colorado, Oklahoma and South Dakota were open as well.

Kemp began easing COVID-19 restrictions in late March, following states like Texas and Mississippi and drawing the ire of Democrats. The Centers for Disease Control didn't relax its guidelines for vaccinated people until mid-May.

Killings are up 58 percent in Atlanta from 2020, but even that year, amid widespread lockdowns, was one of the deadliest in decades, according to The Atlanta Journal-Constitution. There were reportedly 157 homicides in 2020, up from 99 in 2019.

"For two months we’ve had a crime suppression unit working, using extra state resources, emergency funding to try to help with the problem because I hear about it every single day," Kemp said on Monday.

"And in just two months by putting boots on the ground and officers on the street and in the air and working with state and local partnerships we’ve done almost 3,100 arrests, we’ve apprehended 71 people who had outstanding warrants and we’ve impounded almost 300 vehicles going after street crimes."

"We’re not blaming that on anybody else and we’re just doing something about it and it’s about time she [Bottoms] did as well," he continued.

"We are doing every single thing we can," the Democratic mayor said on Friday. She said her administration is making a push for young people to find work this summer, noting closed schools of the past year left young people restless.

"We’re getting at least 1,000 young people to work this summer. That will help until we deal with systemic issues of the gun violence epidemic in this country - how easily young people, people with mental illness can access guns in this country."

Kemp tweeted Saturday in response to Bottoms: "According to the mayor, rising crime in our capital city is everyone’s fault but hers. Getting Georgians back to work, back to school, and back to normal didn’t lead to more crime. The left’s anti-police, soft-on-crime agenda is to blame."

He reiterated that sentiment on "Fox & Friends" on Monday saying that "we've got to start tackling the problem where it happens."

He added that Atlanta needs "someone to back their law enforcement agency up, back the men and women on the street… and give them direction to go after these folks and send a message."

"That's what I've told our folks," he continued, noting the state has "a great partnership with the Atlanta Police Department, but they're having to ride with us because they can't chase anybody."

"It’s hard to go after violent criminals When they run away from you [and] you can't chase them," he stressed.

Kemp added that he believes there are "a lot of reasons that you could potentially have" to explain the increase in crime, "but the fact is, there's one way to stop it, and that's to go after them and send a message and say, ‘Look, we're not going to put up with this anymore.’"

A spokesperson for Bottoms did not immediately respond to Fox News’ request for comment.