Georgia Gov. Brian Kemp announces his plan to expands COVID-19 vaccinate eligibility to Georgia teachers, others during a press conference on Feb. 25, 2021.

ATLANTA - After weeks of waiting and political pressure, Gov. Brian Kemp has officially added Pre-K through 12th-grade educators and staff among other groups to be eligible for a COVID-19 vaccinations in Georgia. That includes both public and private schools as well as those who work for Georgia's Department of Early Care and Learning.

"I believe it is vitally important more for more Georgians to return to normal. For too many parents, this is simply impossible to do while your child is home learning through a screen. Virtually schooling is leaving too many children behind and parents are literally at wit's end. They are also very exhausted," Kemp said. "We must have every student back in the classroom five days a week statewide."

Kemp said as a "local-controlled governor" he has respected the school districts’ decisions on how to craft their education plans amid the pandemic, putting the children first in their decisions, but it is time to get children back into the classroom.

"But moving forward, we cannot delay full in-person learning any longer. Our children cannot afford to wait until fall. The costs are simply too high," Kemp said. "Georgians deserve to return to normal as soon as possible and that will not happen without schoolhouse doors open for face-to-face instruction each and every day."

Mike McGowan, the chief of staff in the 46,000-student Cherokee County school district, said he hoped his district would be able to obtain doses through the local public health department to directly hold vaccination clinics for the district’s 5,000 employees.

"We’re hoping it will reduce the spread of COVID," said McGowan, who said the district has recorded more than 3,000 cases of the virus and has ordered people into quarantine more than 17,000 times since opening for in-person instruction in early August.

Unlike K-12 employees, child care providers might not be able to directly administer clinics. But Early Care and Learning Commissioner Amy Jacobs said her department would do everything it could to guide 65,000 employees of child care centers toward getting vaccinated. Although 98% of the state’s 4,500 licensed child care centers are open, a significant number of families are still keeping their children home, Jacobs said.

The expanded list of those eligible will includes teachers beginning March 8.

Kemp called on school districts to work with the state on this endeavor. That expansion is planned to go into effect on March 8 and will also include adults with intellectual and developmental disabilities and their caregivers as well as parents of children with complex medical conditions to the list.

"Many have had to stay shelters in place for months on end for fear of infecting their loved one or spreading the virus themselves, I have read those stories, I cannot imagine what they have had to go through," Kemp said about adding parents of children with complex medical conditions, adding that they are in his and his family’s prayers.

Vaccine eligibility was previously only limited to anyone 65 and older as well as emergency workers, health care workers, and employees and staff of long-term care facilities such as nursing homes.

Kemp said he plans to add eligibility to more vulnerable Georgia with high-risk health conditions in March. State health officials are still finalizing the timelines for that expansion and will be announced soon. 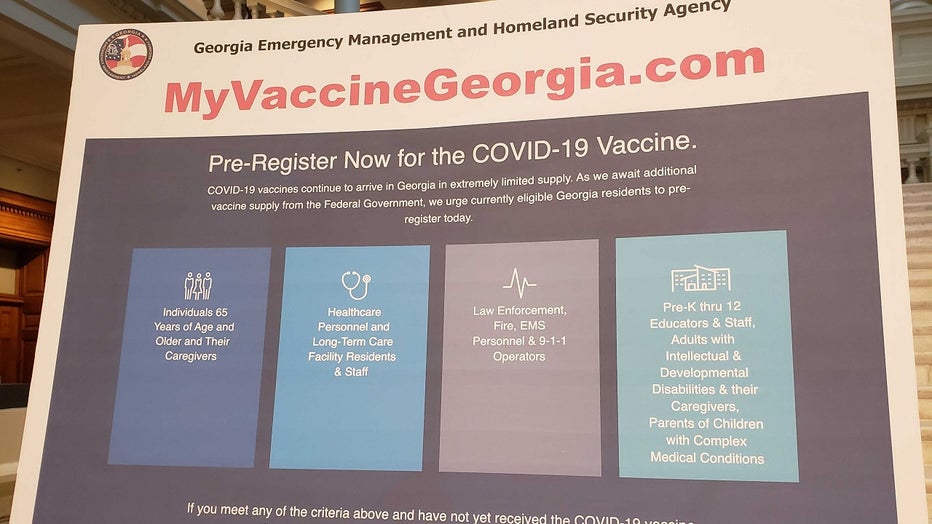 A poster showing the homescreen to myvaccinegeorgia.com on Feb. 25, 2021 as Georgia Gov. Brian Kemp adds teachers to eligibility to receive the COVID-19 vaccine. (FOX 5)

Kemp said he plans to add eligibility to more vulnerable Georgia with high-risk health conditions in March. State health officials are still finalizing the timelines for that expansion and will be announced soon.

Georgia has administered more than 1.8 million doses according to the Department of Public Health data, with nearly 1.2 million people getting a first dose and 650,000 people completing a second booster dose. The state is nearing 1 million test-indicated COVID-19 infections and crossed 17,000 confirmed and probable deaths Wednesday.

The GDPH reported that more than 800,000 seniors have received at least one dose with more than 57% of all doses going to someone 65 and over.

"My top priority has been to protect the most and get Georgians back to normal. That's why we expanded our vaccination criteria early on to include those over the age of 65 who account for 77 percent of all deaths due to Georgia," Kemp said.

Kemp also said about 34,000 veterans have been vaccinated and he encourages all who have served in the military to contact their VA caseworkers to ensure they get the vaccine.

"While vaccine supplies have been so limited, vaccine had to be prioritized to those who are most vulnerable," the Republican governor said. "Our team feels confident we will continue to see steady increases in our allotment over the next several weeks."

Anyone who is eligible for the vaccine can go to myvaccinegeorgia.com to register for an appointment.

"Again, I want to reiterate there will be more demand for the vaccine than the state has supply," Kemp said. "With the expanded criteria we are announcing today, I continue to ask Georgians for their patience."

Georgia has set up four state-run vaccination sites that can vaccinate about 1,100 people per day or about 22,000 per week at all four. That number can be scaled up as more vaccines become available. Kemp said Thursday those sites have gotten the wait time down to just minutes and people who have made an appointment should not worry about arriving at those sites hours early.

Those sites are located at:

The state is currently getting about 200,000 doses a week, a 70% increase since mid-January, Kemp reported. That number could rise a little as federal officials gave permission to use a third vaccine made by Johnson & Johnson. Officials have said they expect vaccine supply to expand significantly in April. But opening the gates to many more groups could prompt a rush like the one that was seen when Kemp made everyone over 65 eligible in mid-January when there were many complaints about the difficulty of scheduling an appointment.

Georgia's 7-day average of new COVID-19 cases has continued to see a decline. The GDPH reports it is down to 2,024. Hospitalization in the state also has fallen with about 2,100 current patients or only 13% of the current patients hospitalized.

"Throughout our battle with COVID-19, this has been among the most important data points, the team, myself included, has paid attention to," Kemp said. "It is certainly welcome news to all of us and I wanted to thank all of those hospital partners and, of course, their dedicated workforce. The nurses, doctors, staff, administrators, all the way down, you all have done incredible work and we can never say thank you enough for what you have done."

The 2-week positivity rate has also been on the decline. According to the GDPH, that is at 8.4%. To date, more than 7.1 million PCR tests and 1.3 million antigen tests have been administered by the state.

The governor did not mention deaths from COVID-19 in the set of statistics which remain high in the state. On Thursday, 107 deaths were reported by the GDPH and the 2-week average remains above 90. 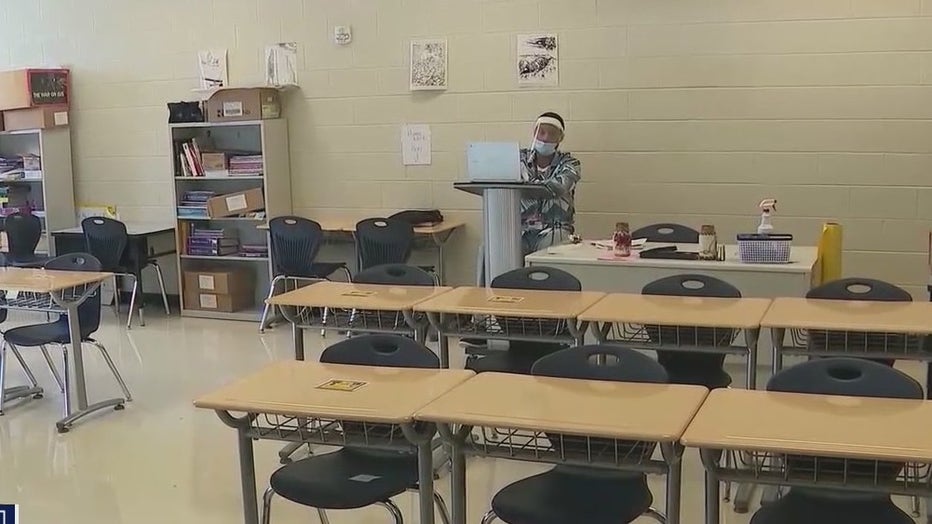