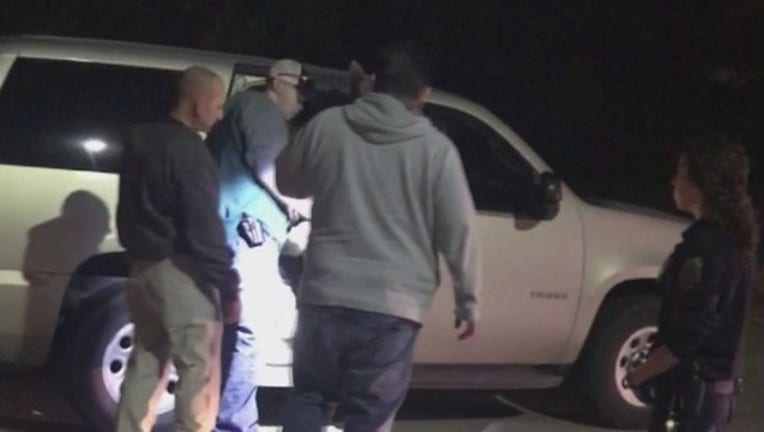 In Orange County, California, dozens of immigrants have signed powers of attorney authorizing relatives and friends to pick up their children from school and access their bank accounts to pay their bills in the event they are arrested by immigration agents.

In Philadelphia, immigrants are carrying around wallet-size "Know Your Rights" guides in Spanish and English that explain what to do if they're rounded up.

And in New York, 23-year-old Zuleima Dominguez and other members of her Mexican family are careful about answering the door, and get worried and start making phone calls when someone doesn't come home on time.

Around the country, President Donald Trump's efforts to crack down on the estimated 11 million immigrants living illegally in the U.S. have spread fear and anxiety and led many people to brace for arrest and to change up their daily routines in hopes of not getting caught.

In El Paso, Texas, Carmen Ramos and her friends have developed a network to keep each other updated via text messages on where immigration checkpoints have been set up.

She said she is also making certain everything she does is in order at all times. She checks her tail lights before leaving the house to make sure they are working. She won't speed and keeps a close eye on her surroundings.

"We are surprised that even a ticket can get us back to Mexico," said the 41-year-old Ramos, who with her husband and three children left Ciudad Juarez because of drug violence and death threats in 2008 and entered the U.S. on tourist visas that have since expired. "We wouldn't have anywhere to return."

The unease among immigrants in the U.S. illegally has been building for months but intensified in recent weeks with ever-clearer signs that the Trump administration would jettison the Obama-era policy of focusing mostly on deporting those who had committed serious crimes.

On Tuesday, the administration announced that any immigrant who is in the country illegally and is charged with or convicted of any offense, or even suspected of a crime, will now be an enforcement priority. That could include people arrested for shoplifting or other minor offenses, or those who simply crossed the border illegally.

Some husbands and wives fear spouses who lack legal papers could be taken away. And many worry that parents will be separated from their U.S.-born children.

"People are hunkering down because they are afraid," said Roberto G. Gonzales, assistant professor of sociology at Harvard University whose research focuses on immigrant and Latino youth.

Dozens of immigrants have been turning up at an advocacy group's offices in Philadelphia, asking questions like, "Who will take care of my children if I am deported?" They are also coached on how to develop a "deportation plan" that includes the name and number of an attorney and other emergency contacts in case of arrest.

In Los Angeles, immigrants have been attending know-your-rights workshops but also calling in to report they're afraid to pick up their children from school, said Jorge-Mario Cabrera, a spokesman for the Coalition of Humane Immigrant Rights of Los Angeles.

Immigrants in the Chicago area have said they are scared to drive, and some are even wary of taking public transit. When Chicago police and federal authorities conducted regular safety checks on a train line earlier this month, many assumed it was an immigration checkpoint.

Word spread so quickly on Twitter and among activist groups that Chicago police issued a statement assuring immigrants, "You are welcome here."

In the Bronx, Dominguez, a college student who is in the U.S. with permission under the Obama administration policy for people who entered illegally as children, is looking into what she needs to do to raise her American-born brother and sister, ages 6 and 11, if their parents are deported. The parents are in the U.S. illegally.

Now, when Dominguez goes out, she tells the others where she is going, with whom, and when she will be home, and expects the same from her parents and siblings. If someone is late getting home, she said, "we start calling."