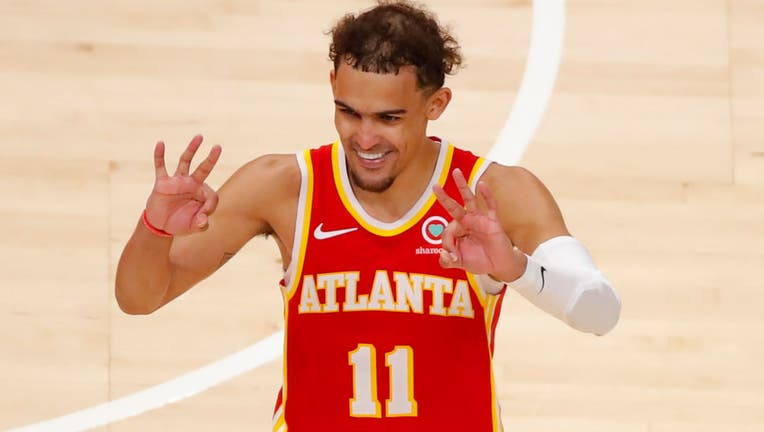 Trae Young reacts in the second half against the New York Knicks during game three of the Eastern Conference Quarterfinals. (Photo by Todd Kirkland/Getty Images)

ATLANTA - After leading Atlanta Hawks in a surprising run to the Eastern Conference Finals, Trae Young is getting a max contract extension.

ESPN is reporting that Young has agreed to a five-year, $170 million maximum extension with the potential to earn as much as $207 million.

According to the report, the contract, which would start in the 2022-23 season and continue through 2027, could expand to $207 million if young is voted onto one of the All-NBA teams.

Young's father tweeted out that he hoped "kids with basketball dreams are watching."

"Proud of you son. Go get the city of ATL that championship," Ray Young wrote.

He also revealed that the signature shoe that Trae wore during the playoffs could be coming out in a matter of weeks.

With Young turning in one dominant performance after another, Atlanta romped past the resurgent New York Knicks in the opening round, then stunned the top-seeded Philadelphia 76ers in the conference semifinals, winning Game 7 on the road.

Despite their quest for the championship ending against the eventual champion Milwaukee Bucks, the team seemed extremely enthusiastic for the future

"This is the beginning," Trae Young said. "We have the city excited and we want to keep it like that."