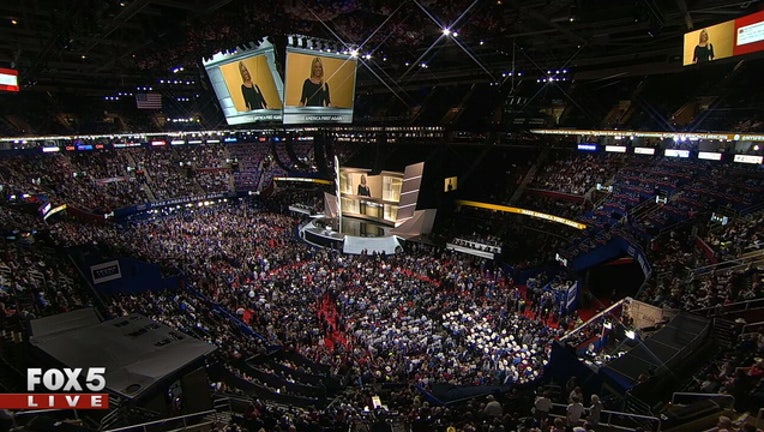 Republicans at their national convention are putting Hillary Clinton on mock trial, declaring her guilty and issuing sentences that include death by firing squad, in a remarkable display of political rhetoric gone wild. Even some Clinton haters say the vitriol has gone too far.

The focus on Clinton has sometimes upstaged what's supposed to be a weeklong celebration and promotion of Donald Trump. Instead of extolling the virtues of their nominee, Republicans have turned to increasingly crass slurs against his opponent.

One GOP delegate and adviser to Trump on veteran's issues, Al Baldasaro, took it a step further than the rest. He dubbed her a "piece of garbage" and suggested a punishment for alleged inaction during the 2012 Benghazi, Libya, attacks that left four Americans dead.

"Hillary Clinton should be put in the firing line and shot for treason," the New Hampshire state lawmaker said in a radio interview Tuesday.

Trump spokeswoman Hope Hicks said that Trump and his campaign don't agree with Baldasaro's comment. The U.S. Secret Service said it was investigating.

On the streets of Cleveland, demeaning buttons for sale say "Life's a Bitch — Don't Elect One" and "Trump vs. Tramp." Others have been even harsher and more vulgar, with crude references to parts of Clinton's body.

Tony Ensminger, a 63-year-old selling buttons outside the arena, insisted "this was mild" compared to what Democrats said about former President George W. Bush.

Visceral disdain for Clinton has been palpable all week on the convention floor, where the go-to chant is "Lock her up." One former GOP presidential candidate, Ben Carson, drew a connection between Clinton and Lucifer, and Senate Majority Leader Mitch McConnell of Kentucky said scandals follow Clinton and her husband "like flies."

It's no surprise that Republicans are emphasizing Clinton's weaknesses more than Trump's strengths. The GOP's strategy for winning in November rests in part on the hope that voters dislike the Democrat more than the Republican.

It's those independents that Trump's campaign hopes it can peel off — if it can keep up a steady drumbeat of negativity about Clinton. Three-quarters of voters in the poll said their pick for president is motivated by a desire to cast their ballot against either Clinton or Trump.

Still, the criticism has triggered a backlash from some Republicans who say it's beyond the pale.

Arizona Sen. Jeff Flake, a Trump critic who's skipping the GOP convention, tweeted that Republicans "can make the case that she shouldn't be elected without jumping the shark." And Bill Pickle, a South Carolina delegate and talk radio host, said those doing the name-calling "sound and act like demons."

"I personally hate — I mean hate — all of the negativity," Pickle said. "What happened to professionalism, manners and humanity in our politicians and citizens?"

"The country needs constant reminders of her disregard for the law," he said.

Clinton, meanwhile, has sought to use the negativity to her advantage. In a fundraising pitch to donors, her campaign said the GOP convention had "felt like a dark turning point in American politics."

"If you closed your eyes, you could imagine it being a lot like a witch trial — they were barely one step removed from screaming 'burn her at the stake,'" the email said.

Does it matter that this is the first time a major party is picking a woman to be its nominee? Johnny McMahan, 65, a GOP delegate from Arkansas, said he had no problem with a woman being president but that some of his friends felt differently.

"They say women are too emotional to be president," McMahan said.

Though assailing the opposing candidate is standard fare at political conventions, this year the attacks have transcended policy positions and become intimately personal. The relentless spotlight on an opponent's supposed criminality is another departure.

Trump's campaign has worked to sow distrust by using vague insinuations against Clinton that are hard to prove or disprove. The attacks seem intended to evoke echoes of the 1990s, when President Bill Clinton's brand was degraded by a scandal that led to his impeachment.

On Wednesday, Trump campaign chairman Paul Manafort mused that Attorney General Loretta Lynch had "probably" given special information to Bill Clinton that helped his wife avoid criminal charges, during a brief airport meeting that Lynch has acknowledged was a mistake. He said the "Lock Her Up!" chant punctuating speeches at the conventions "probably reflects the attitude of a lot of people in America."

"They don't understand why justice wasn't done," he said.

AP Polling Director Emily Swanson contributed to this report, along with AP writers Sam Hananel and Alicia A. Caldwell in Washington, Steve Peoples and Jill Colvin in Cleveland and Meg Kinnard in Columbia, South Carolina.