How should the US respond to the Russia-Ukraine crisis

Why did Russia end up invading Ukraine, how will it impact the United States, and how should the world respond? Experts weigh in on one of the biggest diplomatic crisis in Europe since World War II.

DAHLONEGA, Ga. - What caused Russia to invade Ukraine this week and what the impact it'll have on the United States?

Experts said Russian President Vladimir Putin believes that Ukraine is a part of Russia and should never have been separated from the Soviet Union, so he’s taking back the land.

"Ukraine is in a tough spot," Dr. Craig Greathouse, a professor of political science at the University of North Georgia, explained.

He said there's a long, complex history between the two countries but a major reason this invasion is happening is because "Russia considers Ukraine a security issue for them. They don't want it to be a western leaning government, and they want it to be friendly to Russia because it keeps the west away from Russia."

Greathouse said if Ukraine were to become a 'western leaning government' that could threaten things like food supply for Russia.

"It is a barrier between Russia and the states traditionally of Western Europe. Russia has always been concerned about invasion from the west. So one of the things they've always tried to do was create a buffer area," he detailed. 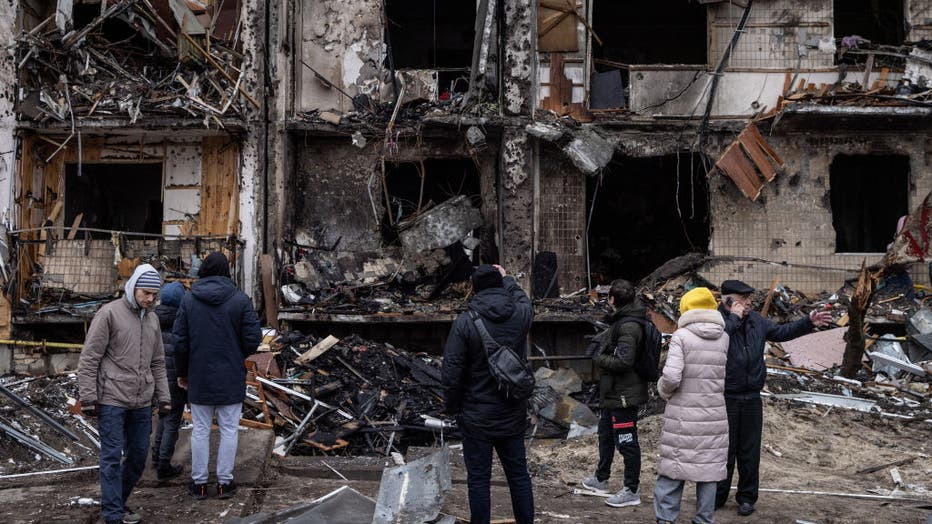 KYIV, UKRAINE - FEBRUARY 25: People look at the exterior of a damaged residential block hit by an early morning missile strike on Fe. 25, 2022, in Kyiv, Ukraine. (Photo by Chris McGrath/Getty Images)

President Joe Biden and his NATO partners will send thousands of troops to protect the eastern edge of the border.

Army officials announced that nearly 4,000 soldiers stationed at Georgia's Fort Stewart will deploy to Europe and Africa in response to this escalating conflict.

"They're worried about if Russia gets away with this without any penalties, where do they go next. There's other basically elements of the former Soviet Union that they may try to reincorporate back in. He's been aggressive and NATO’s been very aggressive to say 'where gonna protect our members' so they're drawing a hard line at Ukraine," Greathouse detailed.

He doubts the president will send our troops directly into Ukraine -- partially due to Russia having significant nuclear weapons.

Experts believe there will be several short and long term effects of this war on the U.S. including rising gas and energy prices, trouble for the stock market, and cyberattacks toward the U.S.

"Russia has shown over the last decade that they are more than willing to use cyberattacks to try and push their points," Greathouse said.

Again, this war could last for some time. Greathouse said he doesn't see Putin giving up easily as he pushes to overthrow the Ukraine's government.