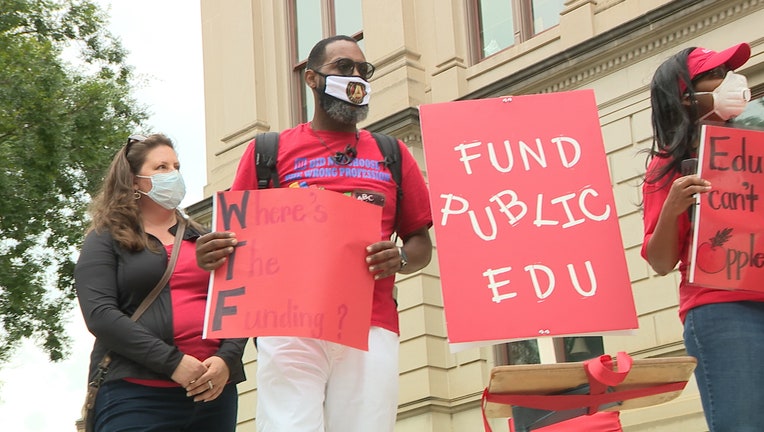 ATLANTA - A small, grassroots group of teachers gathered outside the State Capitol Wednesday to urge lawmakers not to cut public education funding.

"One word: students. We're here for our students," explained Justin T. Johnson, a teacher at Chamblee Middle School.  "To make sure that they receive adequate resources and funding."

The legislature must slash the state's FY 2021 budget by 10% because of revenue shortfalls attributed to the COVID-19 pandemic and economic slowdown.

A Senate proposal cut more than $1 billion from Quality Basic Education Funding, but on Monday, Gov. Brian Kemp released his newest revenue estimate and asked lawmakers to restore about $54 million to QBE.

Deadline approaches for state lawmakers to approve the budget

Legislators must cut an estimated 10 percent from the budget due to shortfalls from the COVID-19 pandemic.

Right now, the fate of the budget lies with the six members - three from the House and three from the Senate - of an appointed conference committee. The group held a public meeting Monday but has since negotiated behind closed doors.

"It has been a team effort to get where we are. I know some folks ain't real happy, but that's what happens when you go into an extreme cut situation. It's what we've had to do," said House Appropriations Chairman Terry England, R-Auburn, during that initial meeting.

Johnson said he and the other teachers plan to be out at the Capitol each day until lawmakers pass a budget. They hope their presence will encourage lawmakers to support public education and they are concerned that cuts like those during the last economic downturn could have lasting consequences.

"There were educators who left the profession because of those budget cuts and so we cannot afford to have another generation to experience that as it will have a long term effect on the community and the nation as a whole," Johnson explained.

Lawmakers have until midnight Friday to pass a budget.