Kemp agreed to tap the state’s piggy bank Monday as he set a new revenue estimate for the 2021 budget year, cutting the ceiling for spending state-collected revenue from $28.1 billion to $25.9 billion.

The Republican governor’s power to set the maximum amount of revenue that Georgia’s government can spend in a year is one of his key influences over how the General Assembly writes a budget.

Kemp had to revise his estimate from what he originally set in January after state revenues tumbled during the COVID-19 pandemic. But his new estimate of $2.2 billion less in state funds is actually an improvement over earlier outlooks. It will equal a 10% funding cut for state agencies, K-12 schools, universities and colleges, down from earlier forecasts of as much as 14% reductions.

“I recognize the difficult decisions that these reductions represent for our state agencies, higher education institutions and K-12 schools,” Kemp wrote. “However, I am confident that our agency leaders can identify and implement innovative cost-saving solutions to craft a balanced budget without undermining their mission or services.” 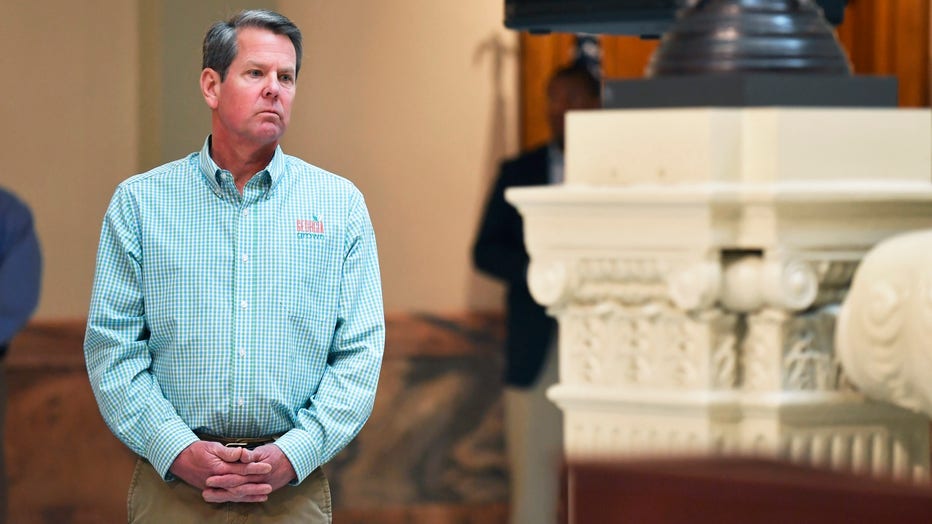 Georgia Gov. Brian Kemp during a COVID-19 press briefing from the state capitol Thursday, May 21, 2020.

That may be optimistic. Many state agencies expect to send workers home without pay one day a month, which would amount to an almost 5% pay cut. Universities have also projected unpaid furloughs, while many K-12 school systems have yet to make decisions.

The state-federal Medicaid program will be fully funded, thanks to another $50 million in tobacco money that Kemp alloted Monday, plus increased federal aid because of the pandemic, but Georgia is on track for reduced capacity to treat substance abuse and mental health problems.

The state could spend $1 billion of the $2.7 billion rainy day fund to close the budget gap for the year ending June 30. Some money will come back when Georgia collects state income taxes in July after delaying them from April. That money is supposed to be placed into the current budget, reducing the deficit.

Kemp wrote that he was dipping further into the savings account “to mitigate the impact of this revenue decline on operations of state government and our local education authorities.”

House and Senate lawmakers are in final talks over a budget, needing to reach an agreement before the legislative session ends Friday.

Senators have been considering other proposals to raise revenue, including eliminating more than $200 million in tax breaks and increasing taxes on cigarettes. There are also last-minute efforts to expand gambling as the 2021 meeting of the General Assembly ticks toward a conclusion. But none of those measures have passed even one legislative chamber.

Kemp asked lawmakers to pay for increased enrollment in the state’s K-12 funding formula, to set aside $15 million for a new law enforcement training grant program for state and local agencies, and to set aside $2.5 million to train a new 50-person class of state troopers. Current budget proposals eliminate trooper training as one of many savings efforts.