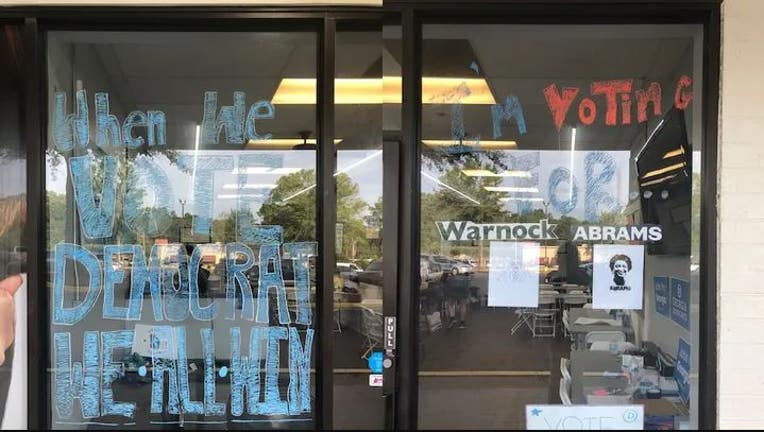 The investigations division within Raffensperger's office is examining whether a recently-opened Democratic campaign office on the outskirts of Atlanta is within the legal-minimum distance of 150 feet from a nearby polling place, a spokesperson confirmed to Fox News Digital.

The field office, which the Georgia Democratic Party opened in late May, is a few doors down from Sherwood Event Hall, a location where voting took place during the state's June 21 primary run-off elections, video of the location obtained by Fox News showed.

Georgia state statute prohibits any person from soliciting votes "in any manner" or displaying any campaign literature of any kind within 150 feet of the outer edge of a building where voting is taking place.

"The law in question in Georgia is pretty plain," Jason Snead, the executive director of the election integrity group Honest Elections Project, told Fox News Digital in an interview. "At the very least what they're doing is bending the rules — or maybe taking a tape measure and saying, ‘we're 151 feet away.'"

The Sandy Springs, Georgia, office — state Democrats' first office of its kind for the 2022 election cycle — has displayed signage with messages like "vote for Dems!" and which boosts the party's respective gubernatorial and Senate candidates Stacey Abrams and Sen. Raphael Warnock in its storefront windows, images of the location showed. Abrams and Warnock both attended the office's May 28 grand opening alongside Democratic Party of Georgia Chair Nikema Williams.

"I’m so very proud to be here today as we open our first office and get ready to knock doors," Warnock remarked at the event.

But Snead expressed concern that the location of the Democratic office may cause confusion for Georgians voting at Sherwood Event Hall. He also noted Georgia prohibits electioneering within 25 feet of a voter who is standing in line at a polling location.

"The intent of the law is to preserve polling places as a sanctuary where voters do not have to worry about last-minute campaigning, attempts at confusion or coercion or anything else. It's designed to help improve the election process," Snead continued. "When you see pictures of what is blatantly a partisan field office with campaign literature and candidates displayed that close, it certainly raises eyebrows."

The Georgia Democratic Party, however, said it has acted in accordance with all state election laws.

The spokesperson didn't respond to questions about whether the office was within 150 feet of the polling place or whether it would remain open through the Nov. 2 election.

"If it is within the 150 feet, it is highly unusual," Georgia state Rep. Barry Fleming, a Republican, told Fox News Digital in an interview. "There are many instances of people being very careful not to violate that rule."

"Never have I heard of anyone opening a campaign office, literally brick and mortar building, within the restricted zone," Fleming added. "So, this is what I would say is highly unusual."

Fleming authored legislation last year that modified Georgia's election laws. After the law was enacted, the Biden administration filed a lawsuit challenging several of its provisions which the administration alleged were discriminatory.

"It's very important to abide by these rules," Fleming said. "The voter is supposed to have an undisturbed area in which to proceed to go do their civic duty and cast their ballot. Intimidation at the polls, or undue influence at the polls, is something that should be avoided at all costs."

Get the latest on this story on FoxNews.com.