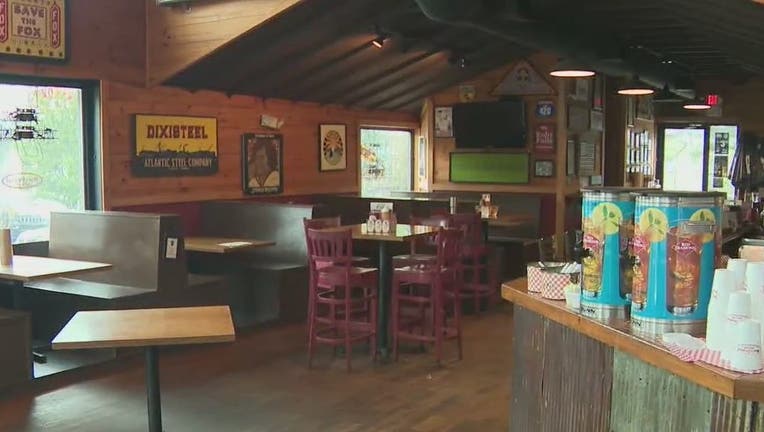 Gov. Brian Kemp declared "Georgia is open for business" on Thursday undoing many of the restrictions he had put in place over the last year to help stem the spread of the coronavirus. The move comes despite urgings from the U.S. Centers for Disease Control and Prevention and President Joe Biden that states should continue enforcing social distancing, reduced crowds, and masks.

This week, CDC Director Rochelle Walensky said the more contagious B.1.1.7 strain of the coronavirus is now the dominant strain infecting Americans.

The Centers for Disease Control and Prevention said the more contagious variant of COVID-19 is now the dominant strain in the U.S.

"Based on our most recent estimates from CDC surveillance, the B. 1.1.7. variant is now the most common lineage circulating in the United States," Dr. Walensky says.

Experts at the CDC believe the loosening of restrictions will help the spread of the new variants and could help see a fourth wave of the virus, seeing another spike in cases and death in the United States.

Gov. Kemp said the repeal of coronavirus orders is an effort to return to "normal," attempting to balance the health of the economy with the health of Georgians. More than 19,000 people have died in Georgia from COVID-19 while many others have been left without an income due to the restrictions.

"Many small business owners are still struggling under the impact COVID-19 has had on our economy," Kemp said in a recorded video message Wednesday. "And we know hard-working Georgians cannot endure another year like the last."

Under Kemp’s new order, restaurant tables now must be only 3.5 feet apart without partitions, instead of the previous 6 feet, and there’s no longer a 50-person limit on gatherings when people are closer than 6 feet, which could allow larger indoor concerts and conventions. He also says vulnerable residents no longer have to stay home under a shelter-in-place order. Also, fitness instructors can allow their students to be 6 feet apart instead of the previous 10 feet, and movie theaters will let people get as close as 3 feet.

Some restaurants to keep safety protocols in place

Despite Gov. Kemp planning to lift many of the COVID-19 restrictions on April 8, some restaurant owners do not plan on making immediate changes.

But some restaurant owners are not necessarily rushing to go back to "normal."

"We reopened and were doing just takeout, and then we slowly introduced customers back, mainly outside first," restauranteur Randy Parks explained what it was like operating Folk Art after the state lockdown last year.

"We're going to stay the way we're operating. It's working. We're able to pay the bills and keep everybody paid, so I don't see a reason for us to rush into it," said Parks.

"We're not going to go chair-to-chair," said Pietro Gianni, who is the part-owner of three Atlanta restaurants. "I don't think it's fair to make a restaurant overcrowded for those that don't want to be vaccinated or people that are just uncomfortable with the whole situation."

Federal officials acknowledge that people have "COVID-19 fatigue," but say it’s too soon to stop being careful.

"We’re really on the brink of a surge," Dr. Anthony Fauci, director of the National Institute of Allergy and Infectious Diseases, said Tuesday. "That would be a setback for public health, but that could be a psychological setback, too ... we just don’t want to have to go back to really shutting things down."

Georgia has recorded more than 1 million cases of the virus, but newly recorded cases continue to fall. The state has been averaging less than 1,400 new cases detected in recent days, the lowest level since last June. The number of newly-reported deaths still remains above the level of the December-January surge, but some of those deaths weren’t recent. The share of positive genetic tests for the virus has been below 5% in recent days, for the first time since widespread testing began last March.

But the share of Georgians who have been vaccinated remains among the lowest nationwide. Only 28% of Georgians have received at least one dose, the third worst among U.S. states and below the national average of 33%, according to CDC numbers. That’s far short of the 70% or more that many experts say would achieve the herd immunity needed to protect people still vulnerable to infection.

The advertisement is part of a multifaceted campaign seeking to educate Georgians about the COVID-19 vaccine.

Some experts fear Kemp is sending a dangerous message when so many people remain unvaccinated.

"While the easing of the last remaining restrictions will put essential workers at an elevated risk, I think the message this sends will have broader impacts for the state as well," wrote Amber Schmidtke, an epidemiologist who writes a briefing on Georgia’s epidemic. "It will lead to a false sense of security among the population that the pandemic is over."

Georgia never had a statewide mask mandate, despite repeated appeals from some medical professionals. After initially prohibiting them, Kemp eventually allowed cities and counties to impose mask requirements, if their local area was recording a significant number of cases. Some places, such as Tift County, are considering rolling back mask requirements. Other places though, including Chatham County, have extended their mask mandates.

The public health emergency giving Kemp sweeping powers has been in effect since March 14, 2020, and will last through at least April 30.