ATLANTA - How would you like to travel from Atlanta to Charlotte in just a little more than 2 hours? Georgia DOT says it's possible.

The idea of getting from Atlanta to Charlotte with no traffic in less than half the time is quite appealing to Micah Bray.

"I think it would be fantastic!" said Bray who was attending a meeting held by GDOT to gauge the interest of the public on high-speed rail between Atlanta and the Carolinas.

GDOT says they're in the very early stages of studying trains that will zip travelers from state to state with speeds up to 220 miles an hour. 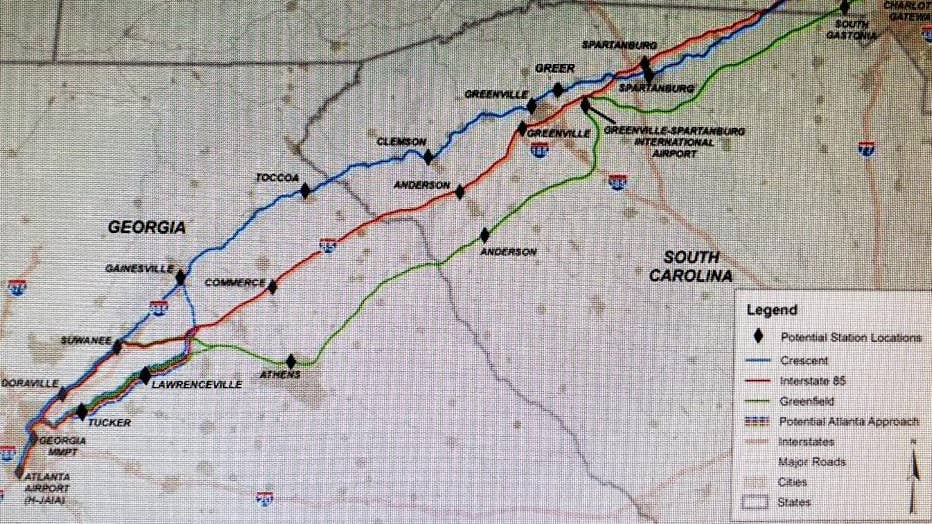 At Tuesday night's meeting, GDOT showed three different proposed routes. The fastest and most direct route would travel along Interstate 85 and serve the most passengers, but would also cost the most at more than $15 billion. The Southern Crescent route would follow the Norfolk Southern Railroad corridor and cost much less, a little more than $2 billion, but would also take much more time to travel between Atlanta and Charlotte, close to 5.5 hours. The third option, the Greenway Route, is somewhere in between as far as cost and time.

Mason Hicks attended the meeting to find out more about the proposed plan. Hicks has lived the past decade in France and often travels by train.

"It's very comfortable. Imagine you have these large picturesque windows and the landscape passes by almost at the perfect speed so you can enjoy it," said Hicks.

GDOT can't give a timetable for how long something like this would take or if it will ever come to fruition. Right now, they want to find out what people think about it.

There will be another meeting on Wednesday night in Greenville, South Carolina and one in Charlotte on Thursday.