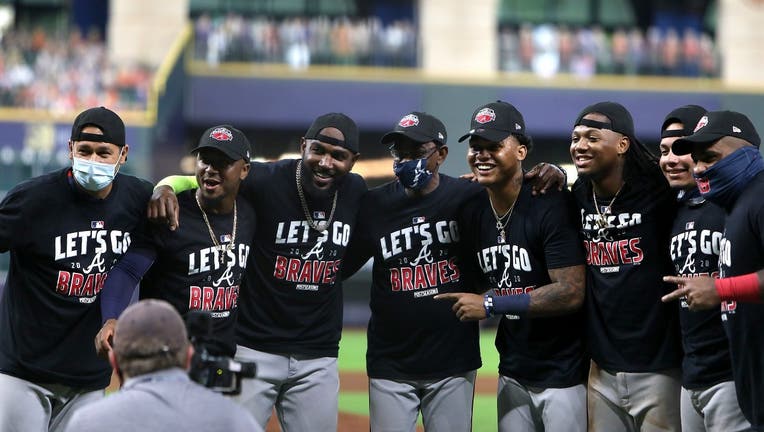 Atlanta Braves players celebrate on field after winning Game 3 of the NLDS between the Atlanta Braves and the Miami Marlins at Minute Maid Park on Thursday, October 8, 2020 in Houston, Texas. (Photo by Michael Starghill/MLB Photos via Getty Images)

HOUSTON - For the first time since 2001, the Atlanta Braves have made it to the NL Championship Series. Game 1 of that series will now air on FOX 5 Atlanta on Monday night.

The Braves and Dodgers will have a showdown in Texas to see who the National League’s top team is. The battle for the NL pendant will take place at Globe Life Field in Arlington, usually the home of the Texas Rangers, as part of efforts by Major League Baseball to form a bubble around the Postseason teams.

The Braves will be also be opening Truist Park for a ticketed socially-distanced watch party for the best of seven series.

In the American League, the Houston Astros eliminated the Oakland Athletics in four games and advanced to the player the winner of the series between the New York Yankees and Tampa Bay Rays for a chance to go the World Series. The series begins Sunday.

The AL Championship Series gets underway Sunday at 7:37 p.m. at Petco Park in San Diego. Game 2 is scheduled for 4:07 p.m. Eastern on Monday. Both games will be televised on TBS.

As with everything this year, the Postseason schedule is subject to change, so stick with FOX 5 Atlanta for the latest.