Dr. Demonie Kinney qualified to run for Georgia House District 92 but because of the recent redistricting, he doesn't actually live in the district.

ATLANTA - Demoine Kinney is a candidate for state representative in Rockdale County, even though his home is no longer in House District 92. He and his wife, Merita, were excited to vote on Monday-along with their 18-year-old daughter who was voting for the first time. They said excitement turned into disappointment when they couldn't find his name on the ballot.

"The election officials in Rockdale told us we're in District 93 now and his name is on the ballet for District 92, so he's still on their ballot. People are voting for him right now. We didn't realize we were confirmed into this new district until we went to vote," said Merita Kinney. 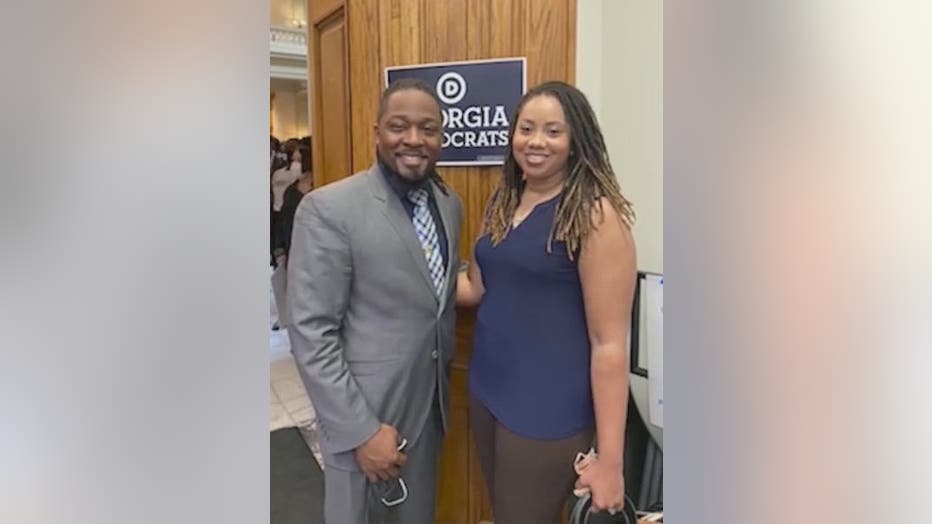 Demoine and Merita Kinney pose for a photo at a Democratic Party of Georgia event. (The Kinneys)

After their failed voting attempt, the Kinneys pulled from maps from the Secretary of State's website and learned their home shifted from District 92 to District 93 after the state legislature redrew Georgia's house district maps in 2021. But they said no one ever indicated their address was now out of the district Kinney wants to represent, not even on March 7 when the Georgia Democratic Party certified his candidacy at the state Capitol.

"I was indeed certified in 92, not 93," Mr. Kinney said following a May 5 meeting with officials from the secretary of state. "They grab your license. They check your information. So, when did my house, when did my street become a part of 93? The line is on our street," said the candidate.

According to a spokesman for the secretary of state's office, the change officially occurred in December, when state lawmakers approved redistricting maps during a special legislative session. The spokesman said it's up to candidates and the state political parties to ensure a candidate is truly qualified to run. A spokeswoman for the Democratic Party of Georgia told FOX 5 it's ultimately the candidate's responsibility to verify they're qualified.

The spokesperson for the Rockdale County Board of Elections said it's up to the Georgia Secretary of State's Office to ensure the ballots reflect the new maps and says county officials can't make any changes to state races on a ballot, which is why the Kinney's name will remain on the ballot for now.

"So, I’m just trying to figure out how that's going to work? I can't vote for myself, but everybody else can vote for me in 92? That's crazy," Kinney said. 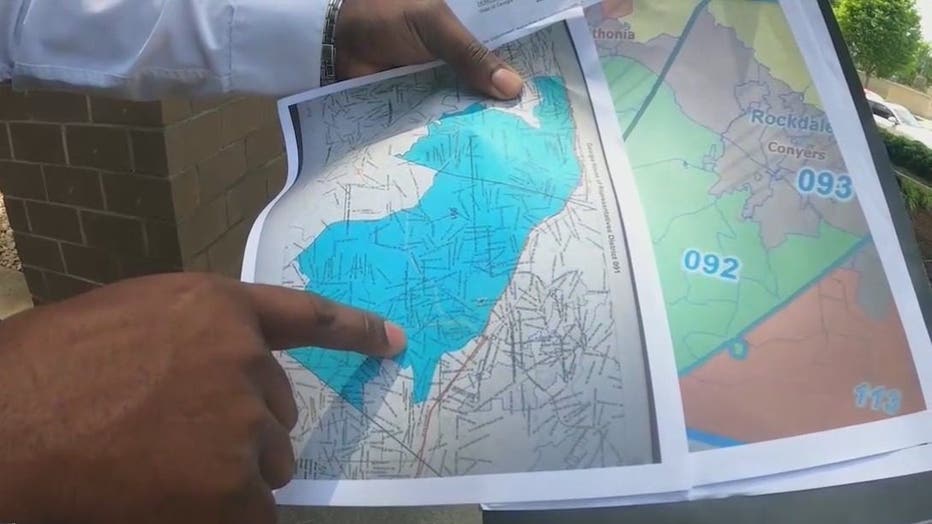 Demoine Kinney shows FOX 5 the map of the new lines for Georgia House District 92 as opposed to where his house is located. (FOX 5)

The Secretary of State said Kinney has two options: withdraw from the race or ask for a hearing to contest the matter with the state. Kinney told FOX 5 he's going to request a hearing soon. Representative Rhonda Taylor, the incumbent for House District 92, could also contest Kinney's candidacy.

Friday afternoon, a spokesperson for the Georgia Democratic Party issued a statement in response to Kinney's concerns saying, "It is made clear to those who come in to qualify that it is incumbent upon the candidate to confirm all of the information on their qualifying form, including the district number, when they sign the Declaration of Candidacy and Affidavit form."

Elections experts told FOX 5 it's not unusual for candidates to qualify for the wrong district, especially in redistricting years. But Kinney believes state and county election officials should do more to ensure district maps are updated to reflect what candidates need to know when they qualify and to  ensure ballots reflect what voters need to know at the polls.