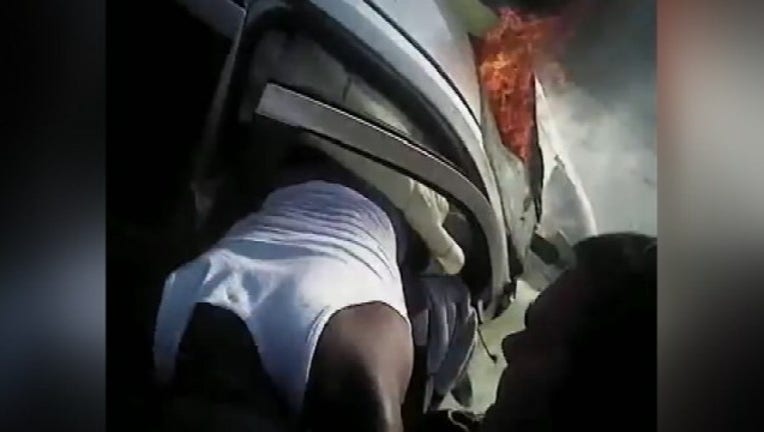 FORT WORTH, Texas - After robbery suspects led Fort Worth police on a high speed chase and crashed in a fiery wreck, the officers then took brave steps to save one of the suspects trapped in the burning car. And the tense moments were all captured on a body camera.

It all started when Officers Brandon Latham and Jared Lake spotted a silver Dodge Avenger that was wanted in connection to an armed home invasion that happened at a house on Avington Way earlier that day on July 16.

But when the officers tried to pull the suspects over, the car wouldn't stop. The officers chased the suspected robbers off I-20 to an intersection.

"[He] ran a red light at about 100 mph and struck another vehicle,” said Lake.

The officers say one man jumped out of the car and took off running, eventually getting caught. Another was cuffed and taken into custody, but the third was still in the car, unresponsive.

“The front passenger was knocked out from the collision,” said Lake. “We couldn't get him out of the car.”

With the door smashed shut, the officers raced to save the man they'd just been chasing moments before.

“I ran around to the driver’s side door and tried to pull him out from that way,” Lake said. “Went into the vehicle, pulled his legs out from under the dashboard where he was wedged, and then officer Lathan and Corporal Collins pulled him out from the window.”

The officers say the suspects they saved had a lot of things to say to them, but it wasn't thank you.

“They weren't very nice about it,” said Latham. “I think they were a little upset they got caught, I guess.”

But they have a pretty good sense of humor about it.

“The real hero is the guy who actually struck their vehicle and stopped them,” Lane jokingly said. “We actually went and shook his hand.”

As for the earlier home invasion, police say the homeowner actually confronted the robbers as they were stealing from the home and one of them pulled a gun before driving off and causing a scene.