The young man exited the juvenile justice system, got a job and a second chance thanks to the Pinky Cole Foundation.

JONESBORO, Ga. - Getting a job and staying out of trouble can be daunting tasks for teens who've just been released from the Department of Juvenile Justice system. A new partnership between DJJ and a popular Atlanta restaurant is making it easier for young men like 17-year-old Christian White to accomplish both.

"I know you don't just go from a worker to a manager, but whatever is next, I really feel like I'm already ready for it," said White.

This is White's first job since he was released from the Department of Juvenile Justice system. The job, he said, has already changed his entire outlook on life and with the steady hours, he said he's far too busy and too tired to get in trouble again.

"I could be doing a lot of other things, but now I'm here. It's just a big difference for me because now I know I have a steady income and it's legit and nobody can ever take the legit money from you," said White.

Young men getting a second chance

Young men are getting a second chance through restaurant jobs.

White is one of 30 young men getting a second chance at success through the Department of Juvenile Justice F.R.E.S.H., the Focusing Resources Effectively to Sustain Hope, Start Youth Initiative and the Pinky Cole Foundation.

"Whatever the need is, we're gonna fulfill that need if these brothers want the opportunity," Pinky Cole said Tuesday afternoon. “This more than about burgers and fries. It’s about helping these young men change their lives.”

Two years ago, Cole founded the popular Atlanta restaurant chain that's become known for its long lines of customers waiting patiently for vegan dishes with racy names. She partnered with Juvenile Justice officials to provide ServSafe Certification and employment because she knows firsthand how incarceration can derail a young man's future. Her father spent 20 years in prison.

"He was sentenced to 20 years in prison the day that I was born and I didn't grow up behind bars, but I grew up receiving phone calls from my dad and I know what the system can do to people and I know how it can affect families," said Cole. 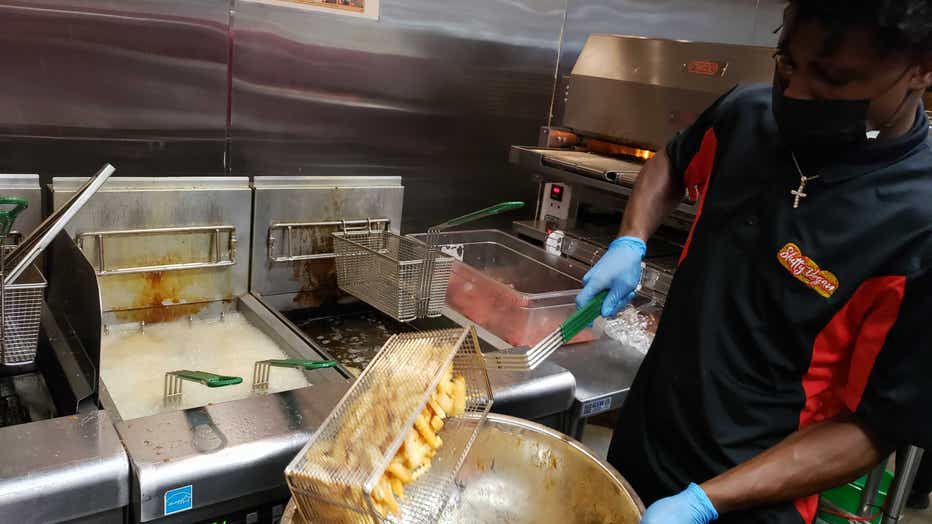 Her foundation will also provide $10,000 scholarships annually for college or technical school for young men in the program who earn a high school diploma or a GED. Commissioner Tyrone Oliver said the partnership will help reduce the odds of recidivism.

"Not only do we hold our youth accountable, but also provide an opportunity of hope so they can become productive members of society and be law-abiding citizens," said Oliver. "It costs the state approximately $90,000 per youth per year to house juveniles in secure confinement in the state of Georgia, so when Ms. Cole takes on 30 of these young men, that's going to save the state $2.7 million dollars and it's going to save these young men--which is even more important.

White said the opportunity gives him a chance to do more, be more, and even envision more for his life.

"For every dark day, there's a brighter day coming ahead of you and everything is eventually gonna be right as long as you want to do right," White said standing proudly in his work uniform.