ATLANTA - Six construction workers were injured after a portion of a parking deck under construction collapsed Friday afternoon in midtown Atlanta, officials said.

The parking garage is located at W. Peachtree Street and Linden Avenue near the Crown Plaza Hotel. Firefighters were called out to the scene around noon after receiving a 911 call.

Firefighters quickly went to work to free trapped workers and check out their injuries.

Moment firefighters rescued a construction worker after part of a parking garage collapsed in midtown Atlanta.

Firefighters had to use a saw to cut concrete and free one worker whose leg was pinned, according to the Atlanta Fire Department.

"One of the things they couldn't do was lift the piece up that was on top of him. They could not use airbags. So, the guys had to rig the piece that was on him with ropes and whatever and they used a saw because of the rebar,” a spokesperson for the Atlanta Fire Rescue told FOX 5. “They had to use a special saw.”

Firefighters were eventually able to lift up the piece of concrete and lift the worker out from under it. Rescuers then used a crane was used to move the injured worker to safety. Rescue crews had to relay instruction to the crane operator who was flying blind.

Firefighters rescued a construction worker after part of a parking deck collapsed in midtown Atlanta.

Of the six workers, four were transported to an area hospital for further treatment. Officials said all the workers suffered non-life-threatening injuries.

SKYFOX 5 flew over the scene to find the remains of a portion of the 11th floor on top of the floor below. 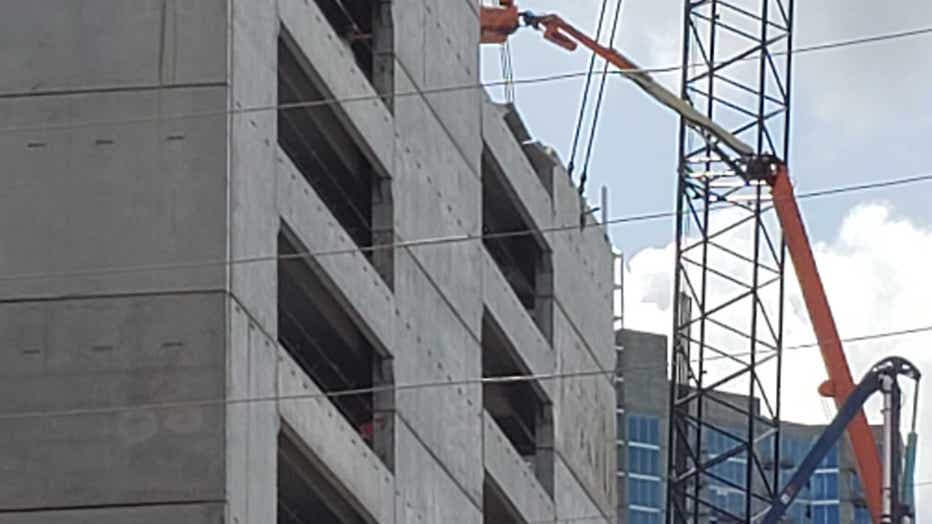 Engineers worked well into the evening to make sure the rest of the floor was secure and to ensure the sides of the building were not compromised which would lead to further collapse.

They are not sure what caused the accident, but construction engineers said they will work with federal investigators to determine the cause.

"Our thoughts are with those who were injured and we would like to thank the first responders who did an excellent job today," a spokesperson for the construction company told FOX 5. 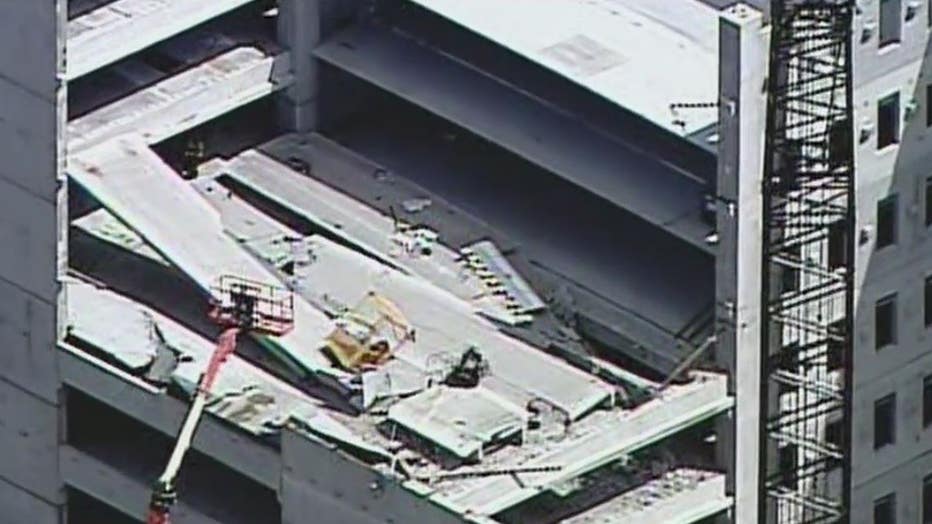 A portion of W. Peachtree Street was closed during the rescue operation and a section of Spring Street from Linden to Interstate 75 and Linden between W. Peachtree and Spring streets were closed until engineers could confirm the remaining structure was sound.

Details on when streets would reopen were not immediately made available.