Investigators work to determine cause of fire that displaced 10 families

DeKalb County fire investigators responded to the apartment complex near the DeKalb-Peachtree Airport. Fortunately, no one was injured.

DEKALB COUNTY, Ga. - A family lost everything after a fire ripped through their apartment complex earlier in the week.

It happened Monday night at the Sierra Village apartments in DeKalb County.

Jessica Allen and her family are grateful to have escaped a destructive apartment fire in DeKalb County.

"We are very blessed because our daughter saved our lives," Allen said. 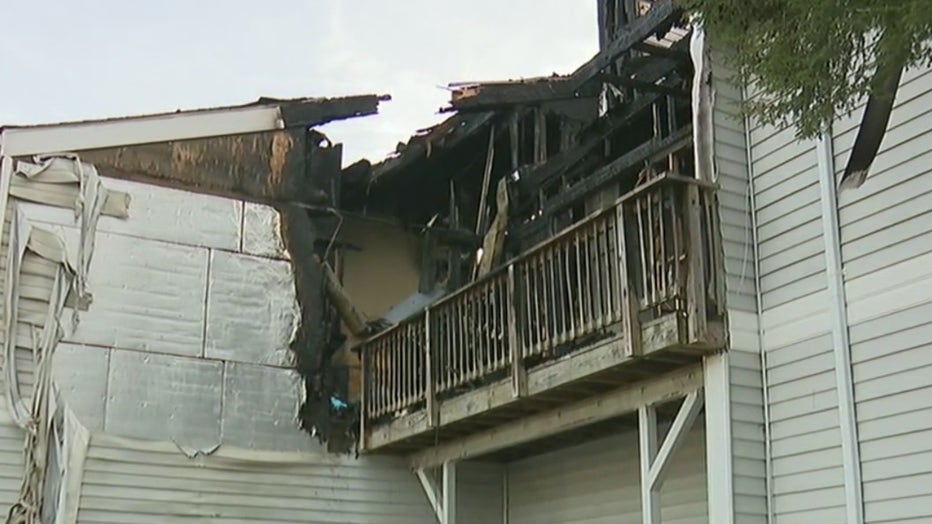 A family lost everything after a fire ripped through the Sierra Village apartments in DeKalb County. (FOX 5 Atlanta)

Allen says she and her husband were asleep Monday night when their daughter noticed a smell and heard a sound.

"When she sat on the couch she started hearing a crackling sound," Allen said. "She got up and ran into our bedroom woke us up and said to get ou get out the house is on fire."

She said they rushed outside with just the clothes on their backs.

"We are outside and in our nightshirt and shoeless. All of us were screaming at the neighbors telling them to get out because the house was on fire the whole building was on fire. When we looked up the fire and the smoke was just rolling off the roof," Allen said.

The family realized another member of the family was still inside.

"The cat ran into the bedroom, and we couldn’t find her," Allen said.

The firefighters went in to search for the animal.

The daughter was begging the firefighters not to give up.

"She said please check one more time. They went back in, and she survived in that fire for two-and-a-half hours," Allen said.

Allen says she lost thousands of dollars in arts and craft supplies, which she uses for her business.

The fire displaced 10 families. Many of those who live there believe the fire started in the walls from an electrical issue.

Some of those residents told FOX 5 Atlanta it took firefighters a moment to start fighting the flames because of some issue.

"For some reason, the water to the fire hydrant was shut off. They couldn’t access the water. For 10 to 15 minutes they were trying to get the water on to start using the water," Allen described.

Allen says material things can be replaced but her family and pets can not.

"We just sat there and watched everything we owned go up in smoke," Allen said.

The family has set up a GoFundMe to help get back on their feet.