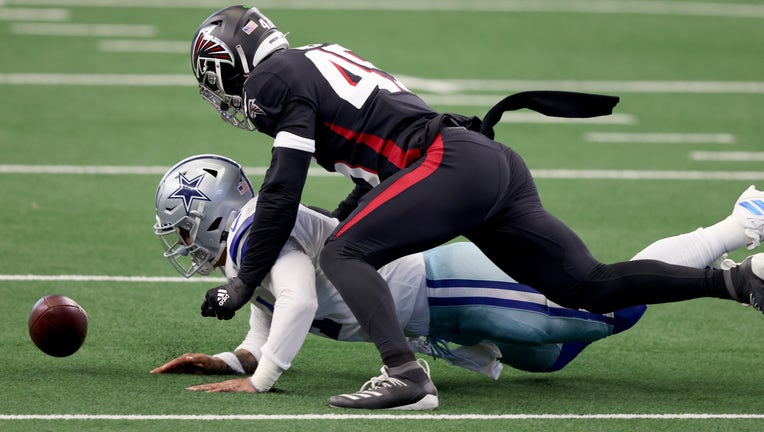 The Falcons were still up 12 in the fourth quarter when Dak Prescott became the first quarterback in NFL history to pass for more than 400 yards and rush for three touchdowns in the same game, getting the Cowboys (1-1) within two.

C.J. Goodwin recovered the onside kick with 1:48 remaining, and rookie receiver CeeDee Lamb’s 24-yard catch got the Cowboys in field goal position so they could run down the clock.

Matt Ryan threw four touchdown passes, two off lost fumbles from the Cowboys, on the way to a 20-0 lead in the first quarter. But the Falcons couldn’t avoid their first 0-2 start under coach Dan Quinn in a performance reminiscent of their blown 28-3 lead in a Super Bowl loss to New England in Houston.

The successful onside kick for Dallas came after two failed fake punts and a gamble from McCarthy in going for the 2-point conversion before the final touchdown the Cowboys would have needed to get even.

The Cowboys were down two after the third short touchdown run from Prescott, who threw for 450 yards and a score. It was Prescott’s first game with multiple rushing touchdowns. He’s the franchise leader for quarterbacks in that category. 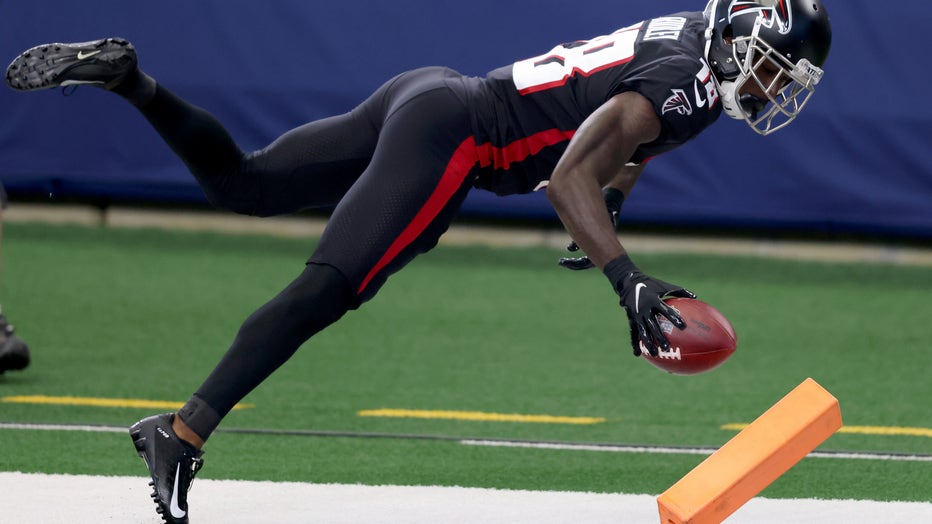 Calvin Ridley #18 of the Atlanta Falcons dives across the goal line to score a touchdown against the Dallas Cowboys in the first quarter at AT&T Stadium on September 20, 2020, in Arlington, Texas. (Photo by Tom Pennington/Getty Images)

After the Falcons drove 56 yards in the final two minutes of the first half for a field goal and a 29-10 lead, the limited crowd of 21,708 booed the Cowboys as they headed for the tunnel in one of the corners of the end zone.

Normally, both teams enter and exit the field from behind the benches, but those areas and the rest of the field-level suites were covered by tarps. The announced crowd was 27% of AT&T Stadium’s 80,000-seat capacity.

Prescott answered with a pair of short rushing touchdowns in the third quarter to get the Cowboys within five.

Ryan responded by converting a third down with a 22-yard pass to Hurst, who also had a 42-yard touchdown catch, and a fourth-and-2 with a 19-yarder to Julio Jones. Russell Gage scored on an 8-yard throw for a 36-24 lead.

Ryan had 273 yards passing after getting 450 in an opening loss to Seattle, the first game in franchise history with three 100-yard receivers in Jones, Gage and Calvin Ridley, who was the leader this week with 109 yards and two touchdowns.

Gage had 46 yards and a score, while Jones was held to two catches for 24 yards.

Prescott’s second rushing touchdown on a 1-yard sneak came after he left the game for two plays and was checked in the medical tent following a roughing-the-passer penalty against Deion Jones.

Dontari Poe was again the only Dallas player to kneel for the national anthem, a week after the defensive tackle became the first on owner Jerry Jones’ team to kneel. Jones has been among the most outspoken against players kneeling to protest social injustice and police brutality.

There was confusion over who was kneeling because several players from both teams were unaware “The Star-Spangled Banner” had started. That included several Dallas players kneeling in the end zone as part of their pre-game routine.

During most of the anthem and when it was over, Poe was the only player for either team kneeling. Safety Donovan Wilson and linebacker Justin March had a hand on each shoulder, a show of support similar to what Poe received when he knelt before the opener at the Los Angeles Rams last weekend.

Falcons: Chicago at home next Sunday.

Cowboys: At Seattle next Sunday.

FULL FALCONS COVERAGE: Get complete of your Atlanta Falcons on the Dirty Bird Report starting at 11:30 p.m. Sunday. And catch Rise Up Tonight weekly following Friday's FOX 5 News Edge and Early Birds on Saturdays at 8:30 a.m.

Here are some of the key plays from Sunday's game: