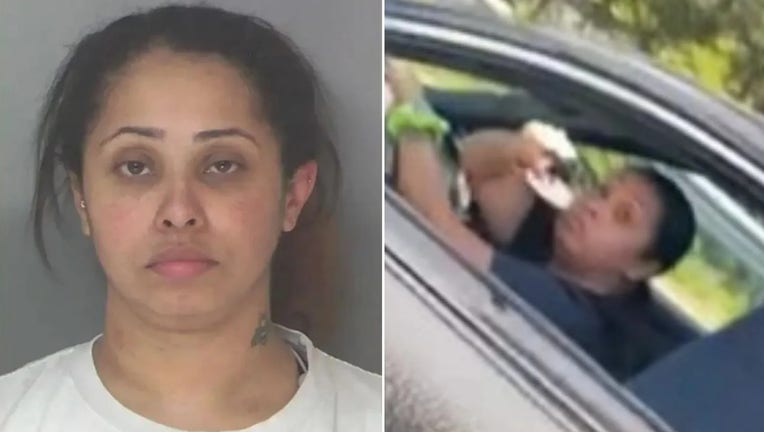 Brittney Griffith turned herself in to police hours after the shooting on I-20 on Sunday, authorities said. (Douglasville Police Department)

DOUGLASVILLE, Ga. - A Georgia woman who shot a 17-year-old in the face during a road rage incident over the weekend had her three children in the car with her at the time of the shooting, authorities said.

Brittney Griffith, 30, turned herself in to police around 11 p.m. Sunday, hours after the shooting on I-20, Douglasville police said.

After an apparent road rage incident occurred around 4:40 p.m., police said Griffith began following the victim’s vehicle eastbound on I-20 after, pulled up alongside it and fired at least one shot.

Griffith shot a 17-year-old who was in the front passenger seat of the vehicle, according to authorities. The teen was rushed to a hospital for treatment and was last reported to be in stable condition.

The suspect allegedly shot the woman on I-20. The suspect's young children were in the car when she fired the gun.

After the shooting, police said Griffith exited at Chapel Hill Road and fled in an unknown direction.

Detectives said they later learned that Griffith’s three children, ages 4 to 9, were in the vehicle with her at the time of the incident.

Before Griffith fled, a passenger in the victim’s vehicle was able to take a photo of the suspect and share it online. Police said that shortly after the photo was shared, the public helped identify the suspect.

Griffith was charged with four counts of aggravated assault, three counts of cruelty to children, and one count of possession of a firearm during commission of a felony.

A judge denied bond for Griffith on Monday.