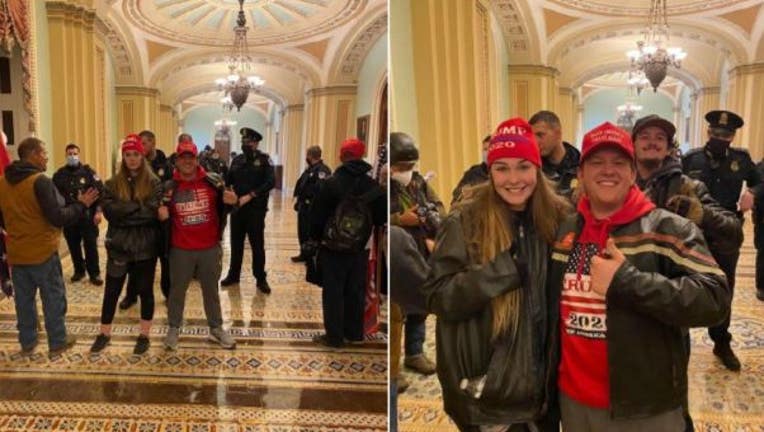 WASHINGTON, D.C. - The FBI said Wednesday two Georgians arrested for their involvement in the Jan. 6 riots at the U.S. Capitol told investigators they were invited into the Capitol by police officers.

Department of Justice documents showed images of two Georgia residents — Danielle McDonald and Nolan Harold Kidd — inside the U.S. Capitol. The images were published in an album by a user on Facebook, identified as Kidd.

The DOJ said McDonald and Kidd traveled to Washington, D.C., together on Jan. 5.

Documents said the two suspects, respectively from Savannah and Elberton, "uniformed police officers near the doors telling them to come inside and showing them where to go."

The images were published on Facebook but later removed, according to DOJ documents.

"Just made it home, I have tons of photos and videos to share with you guys," Kidd wrote, according to the DOJ.

In footage from the Young Patriots Society on YouTube, McDonald states there were part of the first 100 people to storm the Captial.

"We got in from the back," Kidd says during the video.

DOJ documents spot Kidd and McDonald in several videos and images from Jan. 6.

On the day of the riot, in a group chat, Kidd allegedly sent a message saying, "We weren’t just there we went farther than almost anyone into the building . . . [m]aybe about top 15 people."

The following day, McDonald allegedly told the group, "My chest hurts . . . [b]ut we did the right thing."

Images depicted the pair alongside the so called "QAnon Shaman," Jacob Chansley, 33 of Arizona was seen in the capitol wearing face paint, no shirt and a furry hat with horns and carrying a U.S. flag attached to a spear.