Officials give update on I-16 repairs

Gov. Brian Kemp, officials with the Georgia Department of Transportation, and private contractors give an update on the emergency repair work to an overpass in Treutlen County on July 16, 2021, a day after a dump truck carrying tractor tires struck it, dislodging the structure.

SOPERTON, Ga. - Authorities reopened a stretch of a heavily traveled Georgia interstate in both directions by Friday evening, after crews made quick work of demolishing a bridge overpass that was badly damaged by a crash.

"I-16 is now open in both directions," the tweet said, congratulating Georgia’s Department of Transportation for swift work in demolishing the damaged overpass that crossed over the interstate.

Knocking down the overpass went much more quickly than anticipated, said Georgia Gov. Brian Kemp, who flew to the site by helicopter to brief reporters on the progress.

"Really, this team is getting it done a lot quicker than we ever thought it would," Kemp said.

Earlier, officials had said they hoped to reopen I-16, which connects much of Georgia to its coastline, by late next week after a crash knocked the overpass bridge from its support beams. Officials decided the fastest and safest way to reopen the intestate was to destroy the badly damaged overpass and replace it later. The remains of the overpass structure was hauled away by dozens of trucks Friday after it was demolished overnight, officials said.

The short stretch of the interstate between Savannah and Macon was closed in both directions after a tractor-trailer hit the overpass Thursday. Detours were set up on nearby roads, routing heavy traffic through the small towns of Soperton and Adrian.

"Apparently, the tractor-trailer has a dump bed similar to a dump truck," said Russell McMurry, commissioner of the Georgia Department of Transportation. "It appears that it was raised, which then struck the bridge." 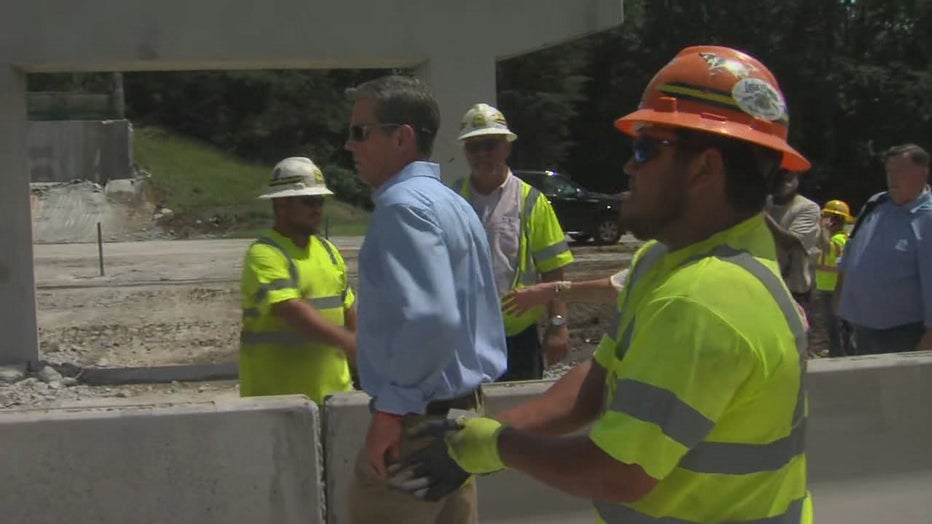 Georgia Gov. Brian Kemp tours the progress made on I-16 in Treutlen County on July 16, 202,1 a day after a tractor trailer dislodged the overpass. (FOX)

The investigation into the crash is in its early stages, but "there are going to be some charges coming," said Lt Col. William Hitchens III of the Georgia Department of Public Safety. He didn’t specify what those charges would be, saying that’s still under review.

Interstate 16 is the main route used by many people from metro Atlanta who travel south to Macon and then take it toward Savannah and Hilton Head Island in South Carolina. The bridge is about 150 miles (240 kilometers) southeast of Atlanta.