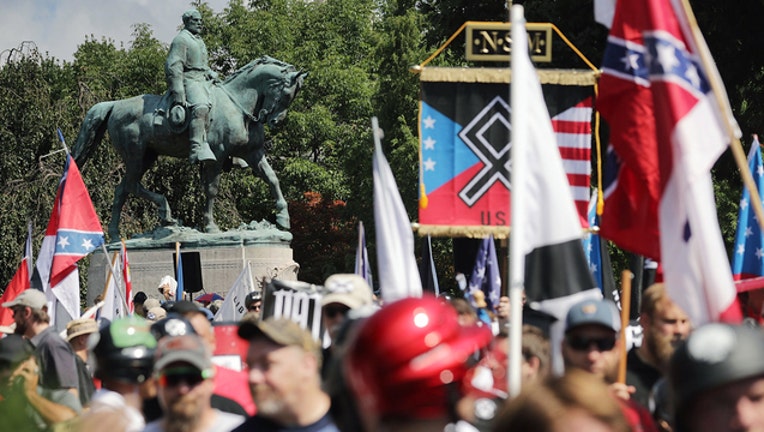 The statue of Confederate General Robert E. Lee stands behind a crowd of hundreds of white nationalists during the 'Unite the Right' rally Aug. 12, 2017, in Charlottesville, Virginia. (Photo by Chip Somodevilla/Getty Images)

CHARLOTTESVILLE, Va. - (AP) -- A white nationalist wanted for crimes authorities say were committed on the campus of the University of Virginia a day before a deadly rally has said he will turn himself in to authorities.

University of Virginia police say Christopher Cantwell of Keene, New Hampshire, is wanted on three felony charges: two counts of the illegal use of tear gas or other gases and one count of malicious bodily injury with a "caustic substance," explosive or fire.

Contacted Tuesday by The Associated Press, Cantwell acknowledged he had pepper-sprayed a counter demonstrator during an Aug. 11 protest but insisted he was defending himself, saying he did it "because my only other option was knocking out his teeth."

Cantwell also said he had been trying for days to find out about whether he had outstanding warrants. When the police issued a statement, Cantwell said he was "convinced" that he is wanted and would turn himself in.

He would not say Tuesday evening where or exactly when that would happen, only that it would be done in the "most appropriate and safe manner possible." He said it would occur in the next 24 hours, "likely much sooner than that," and that he looked forward to his day in court.

Also Tuesday, the city council in Charlottesville, Virginia, voted to drape two Confederate statues in black fabric during a chaotic meeting packed with irate residents who screamed and cursed at councilors over the city's response to the white nationalist rally.

The council meeting was the first since the "Unite the Right" event, which was believed to be the largest gathering of white nationalists in a decade. The demonstrators arrived in Charlottesville partly to protest the city council's vote to remove a statue of Confederate Gen. Robert E. Lee.

Charlottesville resident Heather Heyer, 32, was killed when a car slammed into a crowd protesting the rally. James Alex Fields Jr., 20, has been charged in the death.