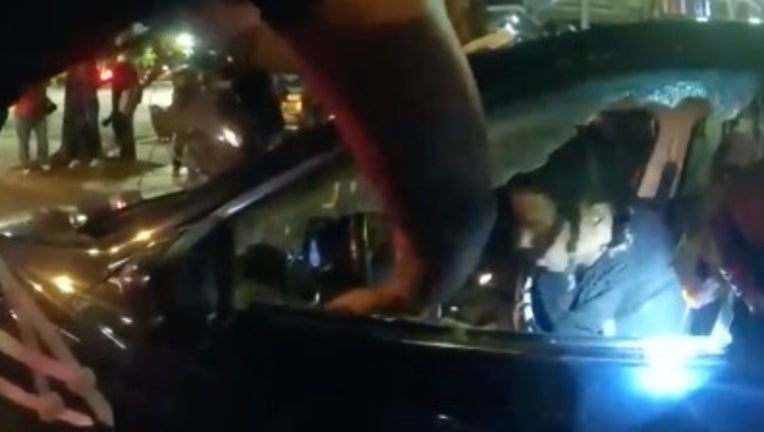 ATLANTA - Officers seen using a Taser on Spelman and Morehouse College students during an arrest in May 2020 will not face charges after an investigation by a special prosecutor and the Georgia Bureau of Investigation.

Messiah Young and Taniyah Pilgrim sued the city, saying they were pulled from a car in downtown Atlanta during the protests over the death of Georgia Floyd. Taniyah Pilgrim, a student at Spelman College, and her boyfriend Messiah Young, a student at Morehouse College, said they were driving near the protests on May 30, 2020, when officers pulled them out of their vehicle.

A body-camera video released by police shows a group of officers shouting orders, smashing the driver’s side window, deploying stun guns and pulling Pilgrim and Young from the sedan. The investigation into the officers' conduct found, "officers’ actions were taken in response to Mr. Young’s and Ms. Pilgrim’s active resistance" and "use of the Taser, and indeed any force used by the officers ended immediately once Mr. Young and Ms. Pilgrim were subdued."

Attorneys from the two students issued a statement:

"Messiah Young, Taniyah Pilgrim and their families are incredibly disappointed and disheartened by the decision announced today by the Cherokee Judicial Circuit District Attorney that charges against the Atlanta Police Dept. officers have been dismissed. The world witnessed the outrageous and unjustified level of violence perpetrated against these college students. How can a broken arm and 25 stitches be deemed the appropriate response for an alleged curfew violation? The fact that these students and their families had to wait in anguish and put their lives on hold for two years while this case was kicked around the legal system is equally outrageous. The narrative that Georgia is on a 'positive path' as it relates to police accountability is a lie that should not be uttered or repeated. This decision only further erodes community confidence in the justice system."

"I wholeheartedly believe that Georgia has made significant progress in improving how our communities and police work together and we must continue that positive path, always guided by the rule of law," Patel said in a statement.