WASHINGTON - Speaking before a Senate appropriations subcommittee on Wednesday, U.S. Centers for Disease Control and Prevention director Dr. Robert Redfield reaffirmed the effectiveness of face masks against spread of the novel coronavirus, saying that wearing a facial covering may be more effective than an eventual vaccine.

During the hearing,  Sen. Jack Reed, D-R.I., criticized criticized President Donald Trump for his repeated public refusal to wear a face mask, saying that the president was “undercutting” a key form of protection amid a deadly pandemic.

"I’m not going to comment directly about the president, but I am going to comment as the CDC director that face masks, these face masks are the most important, powerful public health tool we have," Redfield said, holding a mask in his hand. "And I will continue to appeal for all Americans, all individuals in our country, to embrace these face coverings. I’ve said that if we did it for six, eight, 10, 12 weeks we'd bring this pandemic under control."

RELATED: ‘The worst fall from a public health perspective’: CDC director warns of dual threat of COVID-19 and flu

Redfield went on to explain why masks are currently the best line of defense against COVID-19 and why they might be more effective than a potential coronavirus vaccine.

“These actually, we have clear scientific evidence they work, and they are our best defense," he continued. "I might even go so far as to say this face mask is more guaranteed to protect me against COVID than when I take a COVID vaccine, because the immunogenicity might be 70%, and if I don't get an immune response the vaccine’s not going to protect me. This face mask will."

But Trump disagreed with the director telling

lawmakers that wearing a mask is guaranteed to protect people more from the novel coronavirus than a vaccine.

Trump said at a White House news conference that a mask is “not more effective by any means than a vaccine, and I called him about that.”

Trump says that “I hope the vaccine is going to be a lot more beneficial than the mask.” He also says that “the mask perhaps helps.”

Trump says he still has confidence in Redfield.

Earlier in the hearing, Sen. Dick Durbin, D-Ill., brought up Trump's claim that a vaccine could be ready in as little as three or four weeks. Durbin asked Health and Human Services Assistant Secretary for Preparedness and Response Dr. Bob Kadlec if this was true, and Kadlec responded in the affirmative.

“Sir, it’s possible,” Kadlec said, explaining that because Operation Warp Speed has vaccine candidates being manufactured while they are still in the trial stages, it will be ready for distribution as soon as it is approved. 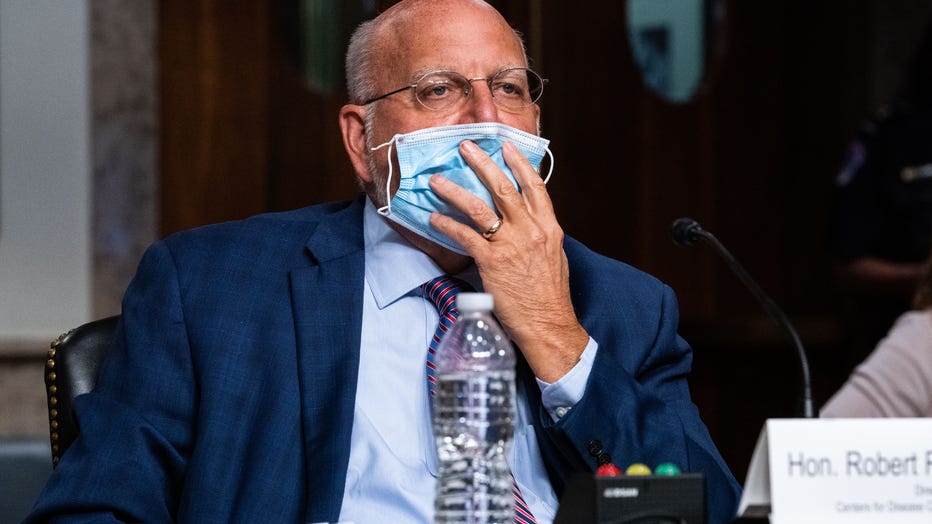 "So if, and when, whether that’s two weeks, three weeks, two months, or four months, once a clinical trial is complete and that scientific data is reviewed by the FDA and approved, then we have vaccine potentially available immediately to use," he said.

Redfield said any vaccine available in November or December would be in “very limited supply,” and reserved for first responders and people most vulnerable to COVID-19. The shot wouldn’t be broadly available until the spring or summer of 2021, he estimated.

RELATED: Infectious disease experts say it may take 1 year for COVID-19 vaccine to be widely available after approval

Trump raised new questions later Wednesday, however, when he publicly contradicted Redfield on the vaccine timeline.

In a White House press conference, Trump said that the CDC director had misspoken and that the U.S. could start distributing a vaccine starting in mid-October.

“I think he made a mistake when he said that. I think it’s just incorrect information,” Trump said of Redfield’s comments. “When he said it, I believe he was confused.”

FOX News and the Associated Press contributed to this story.