Burgers with Buck: The Real Milk and Honey

ATLANTA - Craving brunch, but it’s not the weekend?  Don’t fret, The Real Milk & Honey serves brunch, seven days a week at both of their Atlanta locations in College Park and Cascade.  They are known for huge portions of comfort food with a bit of a Cajun flare.  Shrimp and grits, lobster gumbo and grits, jumbo lump crab hash… you get the idea.

Food Network star, Chef Sammy Davis, who won ‘Chopped: Redemption’, doesn’t hold back with a menu that could be described as ‘over the top’. Just wait until you see the portion sizes. Chef Davis is big and bold, and so is his menu.

Speaking of large and over the top, check out the Seafood Burger. It consists of two, five-ounce patties that are ground in house. The blend is 70/30 to provide a little more fat which content which helps with crispiness and caramelization during the cooking process. One more trick, he waits to season the meat until the last minute. The burger is pressed and cooked at a moderate heat on a flat top for about eight minutes.  Full disclosure, he admits that he stole some of his burger technique from the man himself, Kevin Rathbun.  It’s less rip-off and more of an homage to Kevin. (Note to self…BWB hasn’t paid Kevin a visit yet…Yet!) 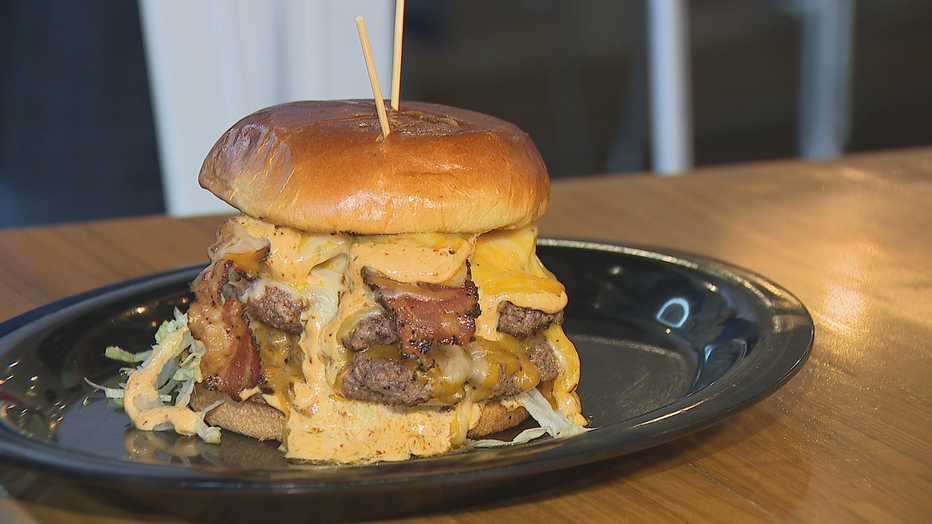 The burger is topped with white American cheese, a heaping helping of hickory smoked bacon, Cajun shrimp, and a special homemade secret sauce on a perfectly toasted bun.  It’s not only big and bold, but oh so juicy too.

For more information about The Real Milk & Honey including locations, menu, hours, and specials... go to their website, https://www.milknhoneycafe.com/location/atlanta/.  And, as always, if you have a favorite burger that you would like to see featured on Good Day Atlanta, tell me about it on https://www.facebook.com/BuckFOX5 or https://twitter.com/BuckFOX5, and don't forget to use the hashtag #BurgersWithBuck and/or #BWB.