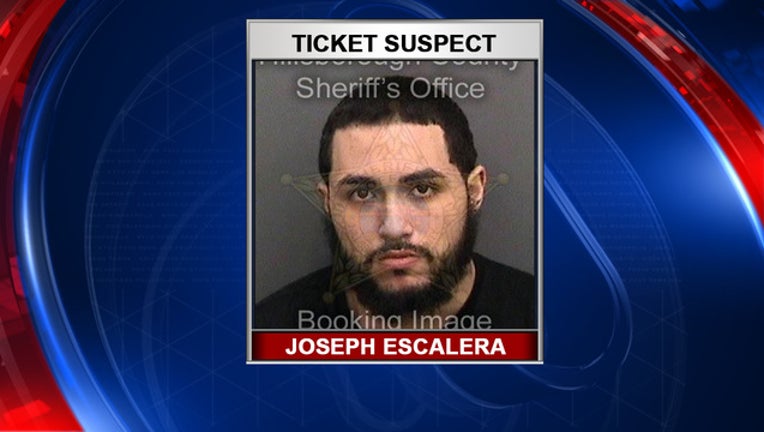 TAMPA (AP) - When three brothers from Louisiana realized they were sold fake tickets to the national championship football game, they decided to fight back by using a fake out of their own.

One of the brothers, Bryant Gentry, told the Tampa Bay Times that Joseph Steven Escalera initially sold them two tickets for $1,000 each. Gentry said he and his older brother met Escalera, 20, outside a Tampa bar on Sunday night and purchased the tickets. They had found his name through an ad he placed on Craigslist, specifically choosing Escalera because his ad was one of the few claiming to be for sale by the owner.

While the brothers said they found Escalera friendly and believable, the eldest brother took a selfie with him "just in case." They went back to their hotel room, intending to buy another ticket for the third brother outside the stadium on Monday. However, Gentry said when they examined the tickets they realized the barcode was on the back instead of the front and there was a strange blotch on one ticket.

"We came to the conclusion we had been burned, and we're blessed enough with good jobs where we could replace that income, but we started thinking about all the other people he was probably taking advantage of and it made us mad," Gentry, 29, said. "What if some little kid's hopes of going to the game were dashed?"

That's when they decided to arrange the second purchase.

They waited outside a bar in Ybor City for Escalera on Monday. As the third brother made the transaction, Gentry said he and the other brother came up from behind, pinning Escalera to his chair while pressing a Coke bottle to the back of his head. They took his shoes, socks and found six more game tickets tucked into his waistband.

"All these people had gathered around watching and I kept yelling `This guy sold us fake tickets, we're not robbing him,"' said Gentry.

When Tampa police officers arrived, the brothers told them their story. Escalera was arrested and now faces charges of grand theft and fraudulent possession of admission tickets. His bond was set at $2,500 but he remained in the Hillsborough County Jail on Thursday.

Police spokesman Steven Hegarty said seven people were arrested for selling fake tickets to the championship game. According to records, police found 24 additional fake tickets in Escalera's hotel room, along with $1,700 in cash.

After giving statements to police Monday afternoon, the brothers, who are Alabama fans, rushed back to their hotel in time to watch the kickoff from a television in the lobby. Clemson won 35-31.

"The loss of the game still hurts, but we got him and maybe that stopped someone else from losing money," Gentry said. "The only way this weekend could have been better was if we caught the bad guy and our football team won."

RELATED: Aboard the Goodyear Blimp above the national championship