Before Tuesday afternoon, Braves fan Miles Neal had never met David and Addison Bramlet in person. He surprised them with two tickets to Game 6 of the World Series last week. The Neals and Bramlets will both be at Minute Maid Park as their favorite teams square off.

HOUSTON - Debbie Neal said she and her late husband noticed their son Miles was learning more than strategy and a competitive attitude from the hours they spent at Turner Field when he was a young boy.

She says Miles was Turner Field's "foul ball hook-up." He was always eager to catch foul balls, but he was willing to use the keepsake to make someone else's day.

"He'd get them signed and give them back to kids," Neal said.

That generous spirit is with Miles years later. He surprised David Bramlet and his 11-year-old daughter, Addison, with World Series tickets to Game 6 between the Atlanta Braves and Houston Astros.

An Astros fan was ready to trade some prized possessions to get his hands on some tickets. As it turns out, the man who got him some tickets is a huge Braves fan.

Miles came across a video David posted on social media. David has a room filled with autographed jerseys and even has stadium seats from the Astrodome, which he was hoping to trade his memorabilia for some tickets for himself and his daughter.

Miles, who hopes to have his own collection of Braves World Series memorabilia after the series, said he was happy to help David and Addison make a lifelong memory.

"I have two kids of my own, and I want to pass down my stuff to my kids, and I know (David) wants to for his," Miles said. "When I was growing up, promises were huge in our household. The desire to keep that promise to take your kid to the game, I saw that and I wanted to be able to help them out." 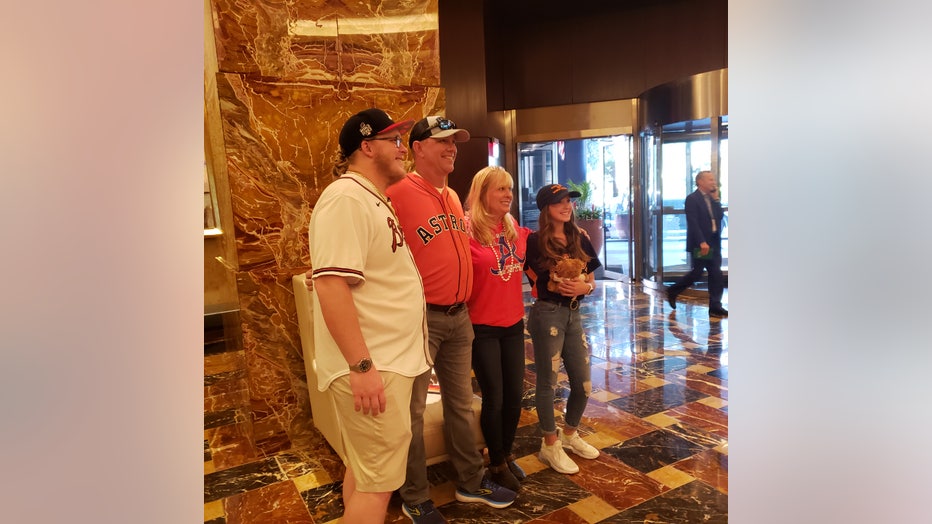 Baseball is a symbol of joy in Miles' life. Miles said the family's tickets behind the dugout were a perfect spot for snagging balls hit out of play.

"Back before they had the netting, we used to be able to toss balls down and get autographs, so it was pretty cool," Miles said.

The Neals had Atlanta Braves season tickets growing up. Miles fell in love with baseball watching Chipper Jones and Rafael Furcal at "The Ted."

His attachment to the former stadium is so great, he named his own son Turner.

He says he sees some of his love for baseball in 11-year-old Addison Bramlet, who's a talented softball pitcher.

Bramlet says she clutched her lucky teddy bear, which she brought to Minute Maid Park, while watching the Astros win Game 5 of the series at Truist Park.

When Houston finally pulled off the win, she says one thought crossed her mind: "We're going to see the Astros!"

Atlanta will host Houston for three games in August 2022. David said he and Addison might be planning a trip to Truist Park soon.