Billionaire Jeff Bezos's Blue Origin successfully launched their first manned rocket into space, with four aboard including the former Amazon founder. Aboard the company's New Shepard rocket, the crew departed from Van Horn, Texas, on the anniversary of Apollo 11 landing on the moon. Bezos was joined by his brother Mark Bezos, as well as the youngest and oldest people ever to travel to space, 18-year-old Oliver Daemen and 82-year-old Wally Funk.

VAN HORN, Texas - Blue Origin’s New Shepard rocket blasted off into space on Tuesday with its founder Jeff Bezos and others on board in what was the company’s first-ever astronaut flight.

Bezos, the founder of both Blue Origin and Amazon, was launched from West Texas on what he deemed to be the "best day ever." He was joined in the 10-minute flight by his brother, Mark, 18-year-old Oliver Daemen from the Netherlands and 82-year-old female aviation pioneer Wally Funk.

Daemen and Funk became the youngest and oldest people, respectively, who have ever gone to space.

"My expectations were high and they were dramatically exceeded," Bezos said during a post-mission press conference.

Blue Origin’s 60-foot New Shepard rocket launched at about 9:13 a.m. EDT following a brief hold. The rocket accelerated toward space at three times the speed of sound before separating from the capsule and returning for an upright landing. The passengers experienced just a few minutes of weightlessness before their capsule then parachuted onto the desert.

Funk was one of 13 female pilots who went through the same tests as NASA’s all-male astronaut corps in the early 1960s but never made it into space at the time because only men were allowed.

"We went right on up, and I saw darkness," Funk said of her historical moment. "I’ve been waiting a long time to finally get up there."

Exiting the capsule: Blue Origin crew successfully back on Earth | LiveNOW from FOX

Cheers erupt as family members of the four astronauts launched to space in Blue Origin's New Shepard hug them as they exit the capsule.

Bezos waved and his brother gave a thumbs-up prior to the launch. A message was also read from the brothers’ sister, Christina, who said she was "so excited" for the trip and that she loved them.

The crew brought a number of historical artifacts, including a piece of canvas from the Wright brothers’ first airplane, a medallion made from the first hot air balloon flight and Amelia Earhart’s goggles.

"I like to think that if Amelia were here, she would be very proud of Wally," Bezos said. 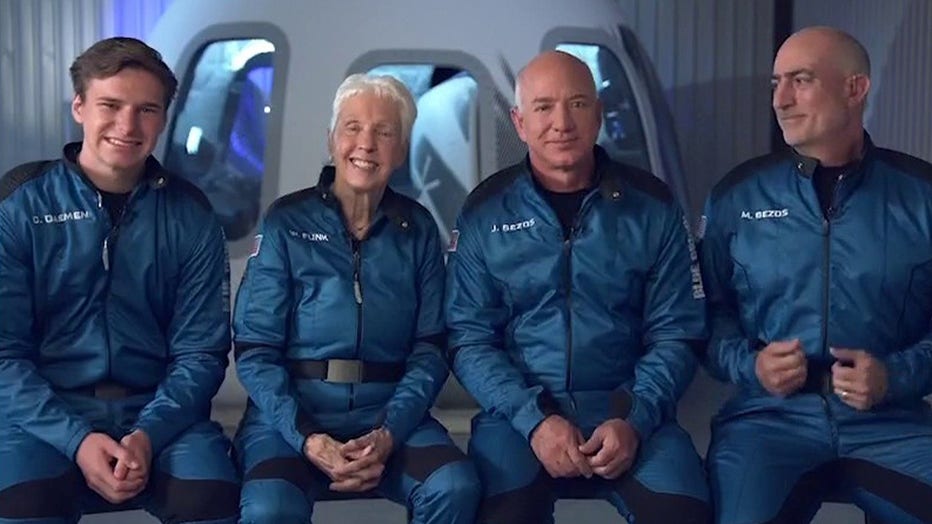 Bezos became the second billionaire to ride his own rocket after Richard Branson’s ride on July 11. New Shepard reached an altitude of roughly 66 miles — more than 10 miles higher than Branson's Virgin Galactic trip.

Unlike Branson’s piloted rocket plane, Bezos’ capsule was completely automated and required no official staff on board for the up-and-down flight.

The company has yet to open ticket sales to the public and is filling upcoming flights with those who took part in last month's $28 million charity auction for the fourth capsule seat. The mystery winner bowed out of Tuesday's launch because of a scheduling conflict. That opened up the slot for Daemen, a college-bound student whose father was among the unsuccessful bidders.

Bezos announced last month that his brother would also join the milestone mission. Mark Bezos said he wasn’t expecting his famous older brother to be on the flight — let alone both of them together.

"What a remarkable opportunity, not only to have this adventure but to do it with my best friend," Mark Bezos said.

Bezos stepped down earlier this month as Amazon’s CEO and just last week donated $200 million to renovate the National Air and Space Museum. Most of the $28 million from the auction has been distributed to space advocacy and education groups, with the rest benefiting Blue Origin’s Club for the Future, its own education effort.

Bezos founded Blue Origin in 2000 in Kent, Washington, near Amazon’s Seattle headquarters. The company is working on a massive rocket, New Glenn, to put payloads and people into orbit from Cape Canaveral, Florida. It also wants to put astronauts back on the moon with its proposed lunar lander Blue Moon.

A look at the career of Jeff Bezos, world's richest man

Jeff Bezos, the founder of Amazon, Blue Origin and owner of the Washington Post, is thought to be the richest person in the world.

"To see the Earth from space, it changes you, changes your relationship with this planet, with humanity. It’s one Earth," Bezos said previously in a video shared on his Instagram. "I want to go on this flight because it’s a thing I’ve wanted to do all my life. It’s an adventure. It’s a big deal for me."