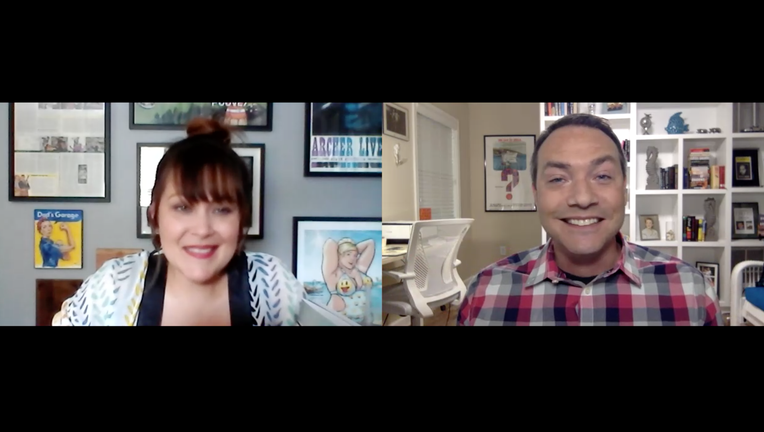 ATLANTA - Atlanta-based actress Amber Nash hasn’t just been sitting around while social distancing during the coronavirus pandemic — in fact, she’s getting active in a whole new way.

“I started doing a lot of online dance classes, that’s been really fun,” Nash says, laughing. “The thing is, I’m a terrible dancer.  But when you’re at home, and you’re not going to a real class with real people, nobody sees you!”

The Lilburn native and Georgia State University graduate is best known to audiences as the voice of Pam Poovey on the Emmy-winning FX/FXX animated series “Archer,” which returns for an eleventh season on Sept. 16. Nash says she finished her work on the new season just days before productions shut down around the world.

“For us, in Atlanta, it was right on the cusp. Lucky Yates, who also lives here in Atlanta, and I went in to record, I think, on March 16th or something," she said. "So…we really didn’t know what was going on, and we had to quickly get in and get out.”

The 11th season of “Archer” follows the show’s James Bond-inspired title character as he finally wakes up from his seasons-long coma.

“One of the fun things is that we’re going back to regular time,” says Nash.  “So, the last three seasons have been in Archer’s brain, because he’s been in a coma for three years  So, he’s been going on and doing crazy adventures, but everybody else has been moving on with life, without Archer.  And so, he wakes up and the world’s moved on without him, and he’s got to get back into the swing of things.”

Along with her work on “Archer,” Nash is preparing to film "How to Ruin the Holidays" here in Atlanta, a comedy written by her husband, Kevin Gillese.  She’s also active in the community, serving on the board of Blue Ridge-based Project Chimps and performing with Dad’s Garage Theatre Company.

And for the Berkmar High School graduate, continuing work on an award-winning series like “Archer” -- right here in her hometown -- is just about as good as it gets.

“I had no idea that this many years later, we’d still be making this show. And the really cool thing is, it’s made here in Atlanta, and there’s so many artists that come right out of school and start working on an awesome show like ‘Archer.’”