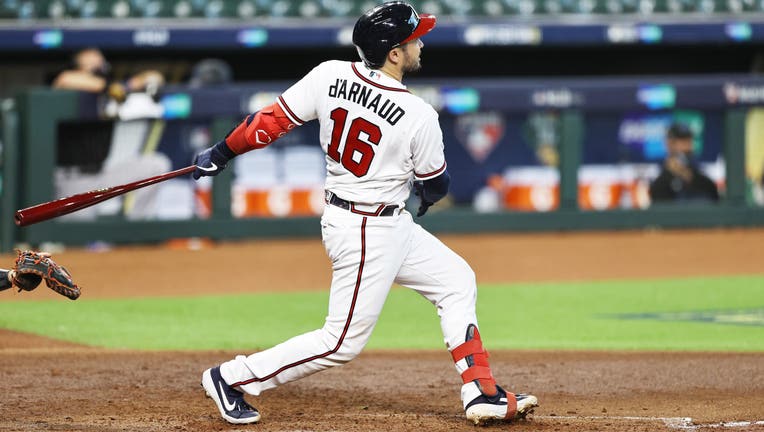 Travis d'Arnaud #16 of the Atlanta Braves hits a solo homerun during the fourth inning against the Miami Marlins in Game Two of the National League Division Series at Minute Maid Park on October 07, 2020 in Houston, Texas. (Photo by Elsa/Getty Images

HOUSTON - Rookie Ian Anderson pitched like a poised veteran, right fielder Nick Markakis made a nifty defensive play late and the Atlanta Braves threw another playoff shutout, beating the Miami Marlins 2-0 Wednesday for a 2-0 lead in the NL Division Series.

The Braves have pitched three shutouts in four games this postseason. Travis d’Arnaud and Dansby Swanson each homered for the second straight day, putting Atlanta one win away from a sweep in the best-of-five matchup.

The 22-year-old Anderson scattered three hits and struck out eight over 5 2/3 innings. The lanky right-hander who made his major league debut in late August added to his impressive outing last week in the wild-card series when he fanned nine in six scoreless frames against Cincinnati.

The 36-year-old Markakis helped preserve the shutout and the lead in the eighth.

Corey Dickerson reached on an error by Swanson at shortstop to start the inning, setting up Markakis’ heads-up play. Jon Berti sliced a high fly down the line that Markakis alertly plucked on one hop and, with Dickerson holding up to see if the ball would be caught, threw to Swanson for a forceout at second base in a close play.

Will Smith retired the next two batters and Mark Melancon, Atlanta’s fifth pitcher of the game, closed the combined three-hitter for a save.

Swanson and d’Arnaud provided the offense in this one, with both players hitting solo shots a day after the two hit multi-run homers in a huge seventh inning for the Braves in their Game 1 win.

Game 3 is Thursday in Houston.

Braves win Game 2 of the NDLS

Players from both teams behaved themselves a day after tempers flared in the opener when Braves star Ronald Acuña Jr. was nailed by a 98 mph fastball. Acuña had a quiet afternoon, going 0 for 4 and striking out all four times.

Swanson’s homer off Pablo Lopez put the Braves up 1-0 with two outs in the second inning.

There was one out in the fourth when d’Arnaud launched his soaring home run to left field, where it bounced off a metal sign high on the wall making a loud bang. Cameras panned to Anderson in the dugout, and the pitcher smiled broadly as he watched the ball sail away.

D’Arnaud’s homer made him the first catcher for the Braves to hit multiple home runs in one postseason since Brian McCann also had two in 2005. He’s made quite a comeback this season after bouncing around between three teams in a tough 2019.

Now he’s helped put the Braves one win away from reaching the NL Championship Series for the first time since 2001 when Bobby Cox was manager and Chipper Jones the team’s star.

They’ve lost in the division series eight times since then, including in the last two seasons — a fact Freddie Freeman said put a chip on their shoulders entering this round.

The Marlins, who made the playoffs for the first time since 2003, bounded their way into this round with high energy and plenty of smiles. They had little reason to grin on Wednesday when they couldn’t scratch a single run across, going 0-4 with runners in scoring position.

It’s put them cusp of losing the first playoff series in franchise history after entering this round 7-0 all-time in the postseason.

They had a chance to cut into the lead in the sixth inning when Berti singled with one out before Darren O’Day took over for Anderson with two outs and plunked Brian Anderson. The veteran reliever than walked Garrett Cooper to load the bases, but the Marlins came away empty when Matt Joyce grounded out to end the inning.

Lopez didn’t pitch badly, allowing just three hits in and striking out seven in five innings. But he was done in by the home runs in his postseason debut after not pitching since Sept. 24.

Atlanta’s Kyle Wright will make his postseason debut when he starts in Game 3 against rookie Sixto Sanchez. Wright hasn’t pitched since Sept. 25 when he allowed two runs in a career-high 6 2/3 innings against the Red Sox. Sanchez started Game 2 of the wild-card round, striking out six in five scoreless innings.