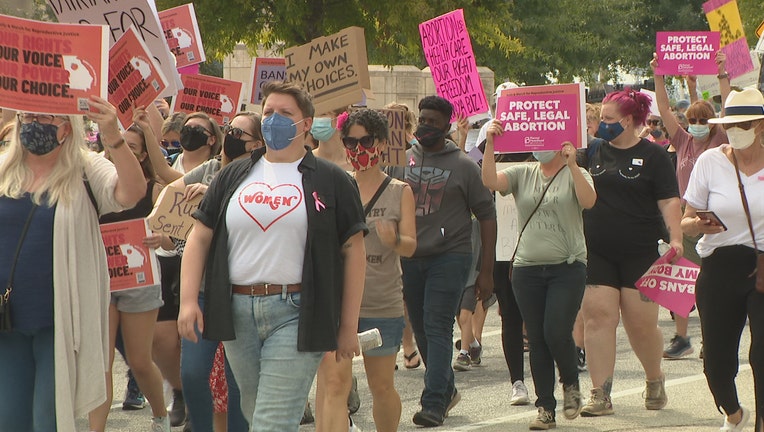 ATLANTA - Activists across the U.S. are gathering for a protest of abortion bans, including one in Georgia.

The "March for Reproductive Justice," began at 11 a.m. at Liberty Plaza in Atlanta, where speakers took to a podium before activists took to the streets.

"One in four people who can get pregnant in this country will have an abortion — an abortion is normal," Staci Fox, CEO and President of Planned Parenthood Southeast said.

Just outside the Gold Dome, activists advocated for people in support of progressive policies to turnout for local elections.

The protest of abortion bans begins at Liberty Plaza in Atlanta, but the movement is a national one, sparked by a new Texas law. A federal appeals court heard arguments over Georgia's own 'Heartbeat Bill." The court delayed that decision last week while it waits for a U.S. Supreme Court ruling on a Mississippi law.

Recent legislation in Texas sparked the synchronized movement across the U.S., but Georgia's own abortion law was in the spotlight a few weeks ago.

A federal appeals court said it will wait to weigh in on Georgia's so-called "Heartbeat Bill" until the U.S. Supreme Court rules on another case that seeks to overturn a woman’s right to an abortion. Mississippi has argued in court filings that the U.S. Supreme Court should overturn its decision in Roe v. Wade. The high court is set to hear arguments in that case in December. Mississippi’s law would ban abortions later than 15 weeks into a pregnancy.

A federal judge blocked Georgia’s 2019 "heartbeat" abortion law in 2019, finding that it violates the U.S. Constitution. That decision was appealed but the law remains blocked, and abortion in Georgia remains available up to 20 weeks into pregnancy.

Cardiac activity can be detected by ultrasound in cells within an embryo that will eventually become the heart as early as six weeks into a pregnancy before many women realize they’re pregnant.

The law included exceptions for rape and incest as long as a police report is filed. It also provided for later abortions when the mother’s life is at risk or a serious medical condition renders a fetus unviable. The law also would have granted personhood to a fetus, giving it the same legal rights as people have after birth.

Georgia’s so-called heartbeat law was one of a wave of laws passed by Republican-controlled legislatures in recent years to attack those rulings in a conservative Supreme Court majority.