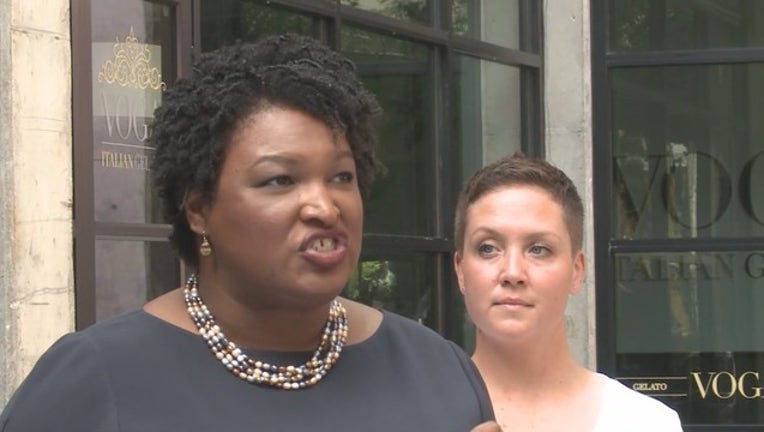 ATLANTA (AP) - The campaign of Democratic candidate for Georgia governor Stacey Abrams is defending her involvement in burning the state flag, which contained a prominent Confederate symbol, during a protest while in college more than 25 years ago.

Abrams' role in that flag-burning protest resurfaced in The New York Times on Monday, the eve of her first debate against Republican Brian Kemp. The paper cited a June 1992 Atlanta Journal-Constitution article; a caption for the accompanying photo identifies Abrams as a woman standing with her arms crossed, watching three other protesters burn the flag.

The report came as Abrams prepared to debate her Republican opponent, Brian Kemp, Tuesday night for the first time in the race.

Abrams' spokeswoman Abigail Collazo said Abrams was involved in a "permitted, peaceful protest against the Confederate emblem in the flag" while a student at Spelman College in Atlanta in 1992.

"During Abrams' college years, Georgia was at a crossroads, struggling with how to overcome racially divisive issues, including symbols of the Confederacy, the sharpest of which was the inclusion of the Confederate emblem in the Georgia state flag," Collazo said.

The Confederate battle flag had been added to Georgia's state flag in 1956 as a rebuke of the growing civil rights movement. Decades later, political pressure to remove what many considered to be a symbol of white supremacy grew as Atlanta drew international attention by hosting the Olympics in 1996. Concerns that the symbol was harming the state's business reputation led to its final phase-out in 2001.

Abrams is seeking to become the first black female governor of any state. Kemp, who also is overseeing the election as Georgia's secretary of state, has portrayed her as "too extreme for Georgia." He's said the race is a battle for the very "soul" of the state.

Abrams has strongly pushed back on the assertion that she's extreme, highlighting her Deep South upbringing and her history of working with Republicans in the state legislature. But she also hasn't shied away from expressing her deep-seated opposition to some Confederate symbols, which she has said were intended to "terrorize" black communities.

After the white nationalist rallies in Charlottesville, Virginia, in August 2017, Abrams advocated for the removal of a massive cliff-side carving on Stone Mountain near Atlanta, the largest Confederate monument anywhere. Protesters who consider such monuments to be symbols of Southern heritage have since targeted her at campaign stops across Georgia.

Kemp's campaign did not immediately respond to a request for comment.