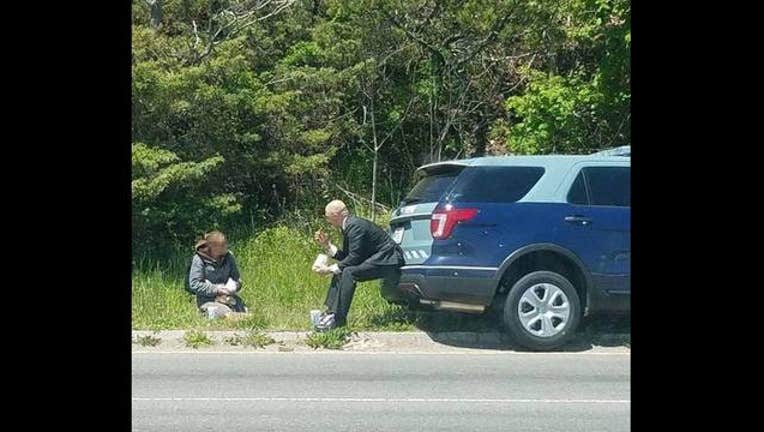 Troopers conduct themselves honorably, and perform selfless acts, every day. Most times, it goes unnoticed. But not this day.

The Massachusetts State Police was shown a photo from a third-party who had not taken the photo, nor knew anything about it. After a little digging, the police were able to locate the citizen who had taken the photo. The citizen said the well-dressed Trooper in a suit appeared to be having lunch with a panhandler . The citizen was struck by what he saw, snapped the photo, and posted it to a Facebook, captioned “And they say chivalry is dead…….Much respect.”

Trooper is Luke Bonin was a bit surprised that someone had taken his photo.

According to the Massachusetts State Police Facebook page, Trooper Bonin had just left court when he drove by the woman, who appeared down on her luck. She was holding a sign and asking for help from anyone who would pay attention. Trooper Bonin continued to drive on – directly to a local establishment, where he ordered two meals. He returned to the woman, pulled up, and exited his cruiser. Thinking he was there to remove her from the side of the road, she immediately stated to him that she would leave, that she knew she shouldn’t be there with her sign. But Trooper Bonin told her, “I’m not here to kick you out.” He then extended the two meals and told her to pick one.

Trooper Bonin, we commend you for your selfless act, and for “doing the right thing” for someone less fortunate than most people.