'Murder hornets': where do they come from and how dangerous are they, Really?

While its nickname exaggerates the human health threat, experts said this hornet is especially big.

The "murder hornets" are back.

The hornets, known as Asian giant hornets or Vespa mandarinia, were first reported in North America on Vancouver Island in British Columbia in August 2019 and have since been detected in Washington state, according to the U.S. Department of Agriculture.

No live murder hornets were reported in the United States in the first half of 2021.

But on Aug. 11, a Whatcom County, Washington resident spotted what the Washington State Department of Agriculture (WSDA) confirmed as 2021’s first live sighting of the murder hornet. The hornet was found in Blaine, Washington.

Officials said the report included a photo of the hornet attacking a paper wasp nest in a rural area east of Blaine, just two miles from where WSDA removed the first Asian giant hornet nest in the country last October.

"This hornet is exhibiting the same behavior we saw last year — attacking paper wasp nests," Spichiger said in a press release. "If you have paper wasp nests on your property and live in the area, keep an eye on them and report any Asian giant hornets you see."

In June, the first dead Asian giant hornet was found in the United States, but experts believe it was likely an old hornet from the previous season.

In response to the detection of the hornet in Washington, WSDA will set live traps in the area in an attempt to catch, tag and track the live hornet back to its nest. 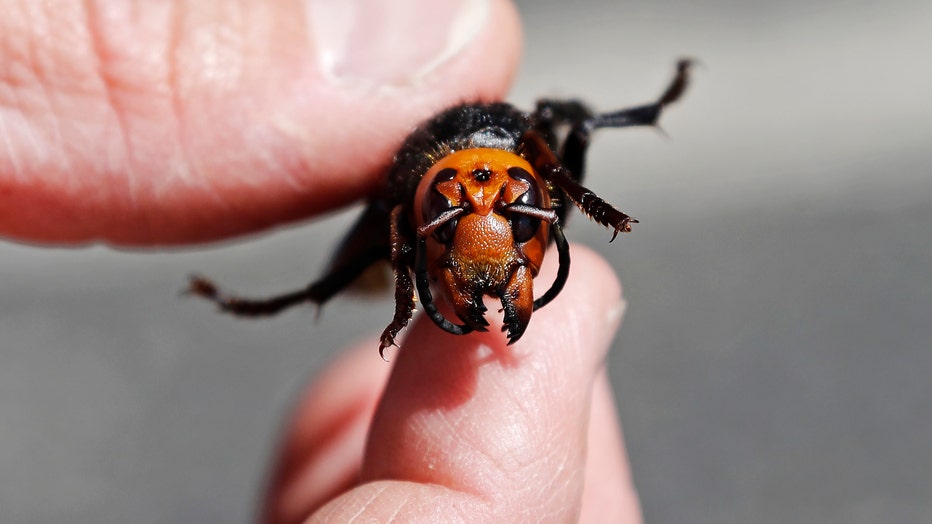 Washington State Department of Agriculture entomologist Chris Looney displays a dead Asian giant hornet, a sample sent from Japan and brought in for research, on May 7, 2020, in Blaine, Washington. (Photo by ELAINE THOMPSON/POOL/AFP via Getty Images)

Asian giant hornets are invasive pests not native to the U.S. They prey on smaller insects like honeybees — a small group of hornets can wipe out a honeybee hive in a few hours.

The venom from a murder hornet can be fatal to humans in extreme cases and mass attacks, the WSDA explains. It is the largest hornet species on Earth and can penetrate a traditional beekeeper’s uniform to deliver its toxins.

While the USDA and WSDA say murder hornets aren’t usually aggressive toward humans, they will sting if provoked, threatened or handled.

In Japan, the hornets kill up to 50 people a year, according to The New York Times. Most murder hornet deaths result from anaphylaxis, sudden cardiac arrest or organ failure.

It’s unknown how the Asian giant hornet migrated to the Pacific Northwest but experts believe they may have traveled to the U.S. on cargo shipments.

The WSDA encourages the public to refrain from approaching or swatting the hornets.

"If you encounter several hornets, run to get away from them or dive into dense brush to make it harder for them to get to you. If a hornet flies inside your vehicle, stop the car slowly, and open all the windows," the WSDA said.

They can be identified by their large frame, usually ranging from 1.5 to 2 inches in length, an orange head with large eyes and their black and yellow or orange and yellow striped abdomens.

To reduce hornet activity, Washington state residents are encouraged to make their environments less attractive to the species by covering all food and drink while outdoors, using wasp guards on bird feeders and properly disposing of garbage, food scraps and pet waste.

While the hornets are dangerous to humans, they are much more threatening to honeybees. The hornets are known to destroy a honeybee colony in hours by decapitating the bees with their jaws, according to National Geographic, in a process called " the "slaughter phase."

The WSDA recommends residents to report possible murder hornet sightings at https://agr.wa.gov/hornets. Reports will be used to assist officials in tracking and setting traps in affected areas. Reports can also be emailed to hornets@agr.wa.gov or called in at 1-800-443-6684.