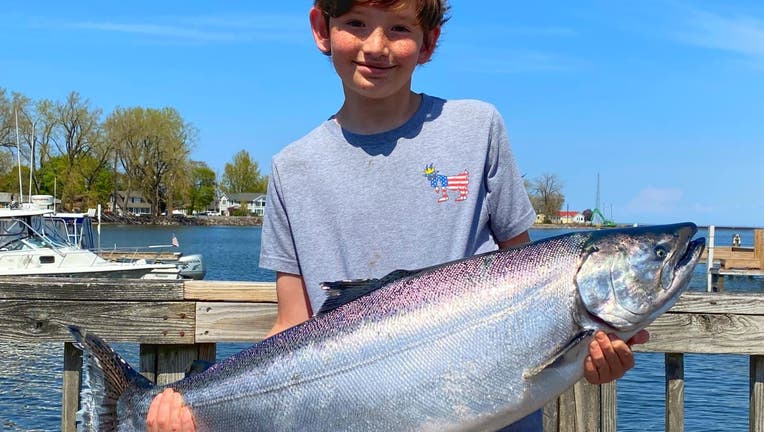 Finnan Murphy, 12, from Pittsford, New York, caught a 26-pound, 10-ounce Chinook salmon on Sunday, which made him the Grand Prize winner of the Spring LOC (Lake Ontario Counties) Derby.

"It’s official! 12-year-old Finnan Murphy is the 2021 Spring LOC $15,000 Grand Prize winner!" the post said. "Finnan was aboard rochestersportfishing.com when he landed this 26 lb 10 oz king. The winner was caught on a Trilene/Warrior combination and weighed in at Wilson Boatyard."

According to another Facebook post by Rochester Sport Fishing, which runs the boat Murphy was aboard, it took the young angler almost 30 minutes to reel in his catch.

Murphy, his dad, two neighborhood friends and their dads go out for the derby every year aboard the Rochester Sport Fishing’s boat, according to the post and NewYorkUpstate.com.

However, last year, young Murphy didn’t get a chance to reel in a fish. So this year, he was at the front of the line this year, the Rochester Sport Fishing Facebook post said.

Murphy told NewYorkUpstate.com, that he was worried that he had lost the fish a couple of times.

"I thought I’d lost the fish two times, when it stopped fighting. And then it would take off again," Murphy told the website. "I’d reel and it just kept pulling line out. When I got it close to the boat, it dove and was pulling even more."

"When it was netted and on the boat, the captain said it might be a $15,000 fish. My jaw just dropped," Murphy added.

According to the website, Murphy’s catch just barely beat out another Chinook salmon that had been caught by 76-year-old Walter Zebker, the day before. Zebker’s fish was 25 pounds, 12 ounces. Instead of winning the grand prize, Zebker went home with only $2,000.

Meanwhile, Murphy got the $15,000 grand prize. He told NewYorkUpstate.com that he plans to put most of his winnings aside for college, although he may spend some of his money on "nice gifts" for his parents and a toy Orbi Nerf gun.

"And I may also get a new fishing pole," he told the website.