DETROIT (FOX 2) - An 11-year-old boy and his father have been shot Sunday morning on the city's west side. A third person inside was also wounded after a suspect opened fire with an assault-style weapon while they were riding in a truck.

The boy was shot in the chest and is hospitalized in stable condition and his father, hit in the leg, is in temporary serious condition. The condition of the third victim and their relation to the other two is unclear as of now. 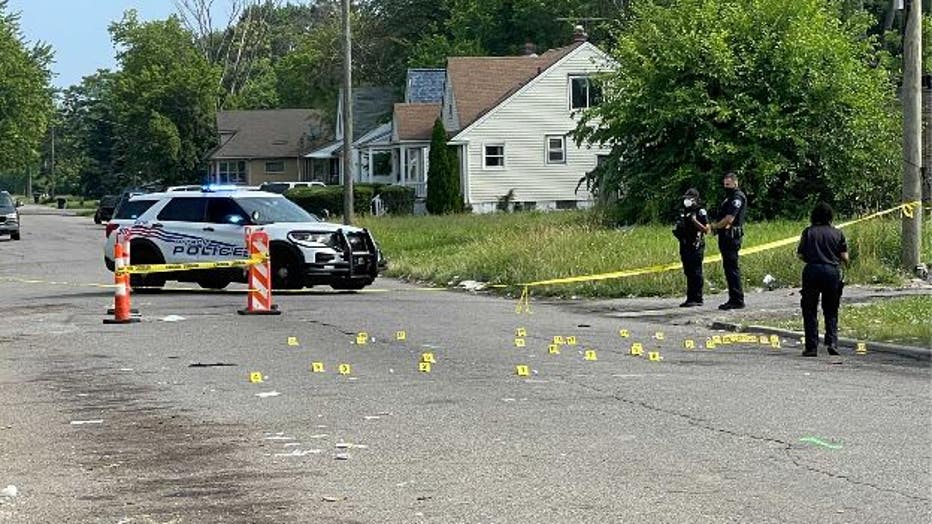 Evidence markers at the scene where a boy and his father were shot near Plymouth and St. Marys in Detroit. Photo by Veronica Meadows.

Detroit police say the shooting happened just before 8 a.m. in the area of Plymouth Road and St. Marys Street, near the Southfield freeway. A black Chrysler 300 pulled past a pick-up truck with four people inside including the victims.

At that point, a suspect got out and fired multiple shots at the truck from an assault-style rifle or handgun at the truck, according to DPD Cmdr. Arnold Williams.

"We are having is an issue with people being violent for no reason," Cmdr. Williams said. "Right now people should be celebrating Father's Day and what we have is a father and a child at a hospital with gunshot wounds. We have an issue with gun violence in the city that is just ridiculous."

Williams said that police do have video of the incident but are asking anyone with information to call Detroit Police Department’s Sixth Precinct Investigative Unit at 313-596-5640 or contact Crime Stoppers at 1-800-SPEAK-UP.

It is the third child in about three days that has been shot in the city. Late Thursday night two children were shot on I-75 including 2-year-old Brison Christian, fatally.

Stay with FOX 2 for more information as it becomes available.