Team of the Week announced

RIVERDALE, Ga - For the first time in five years, the High 5 Sports Team of the Week comes from Clayton County. The Riverdale Raiders (6-1) are locked into a playoff spot with an undefeated 3-0 record in Region 3-AAAAA . Their only loss came to 3rd-ranked Carrollton in week three. After this week's game on the road at Whitewater, Riverdale finishes regular season play against Starr's Mill and Griffin, the only other teams with a shot at winning the region crown.

The Raiders' success has something to do with their new, "old", coach Rodney Hackney who started his head coaching career at Riverdale in 2001 before making stops at Osborne, Mays, Lithonia, North Clayton and Washington, eventually returning to coach the Raiders again in 2018. Hackney won his 100th game as a head coach when the Raiders beat rival Jonesboro 38-21 last Friday night.

"I kind of didn't see it coming because I retired in 2014 from coaching," said Hackney. "I got a little burned out so I stayed out four years. Then when the Riverdale job came open I said, man, this is a great opportunity to come back. My son is a 10th grader on the team so I thought it would be a great opportunity to coach him. I've been given back to so many other people's kids for so long, I thought, why no give back to my own son? At that time I was about fifteen or so wins away (from 100), and I was hoping I could get those in and it worked out, so here I am"

The Raiders clearly have talent, none better than 3-star junior wide receiver Derwin Burgess who has offers on the table from Georgia Tech and West Virginia among others. Another playmaker, Senior receiverTremain Moore is on several SEC team radars according to Hackney. Moore and Burgess seem to live in the end zone in 2019, helping Riverdale score more than 30 points in each of their seven games this season. 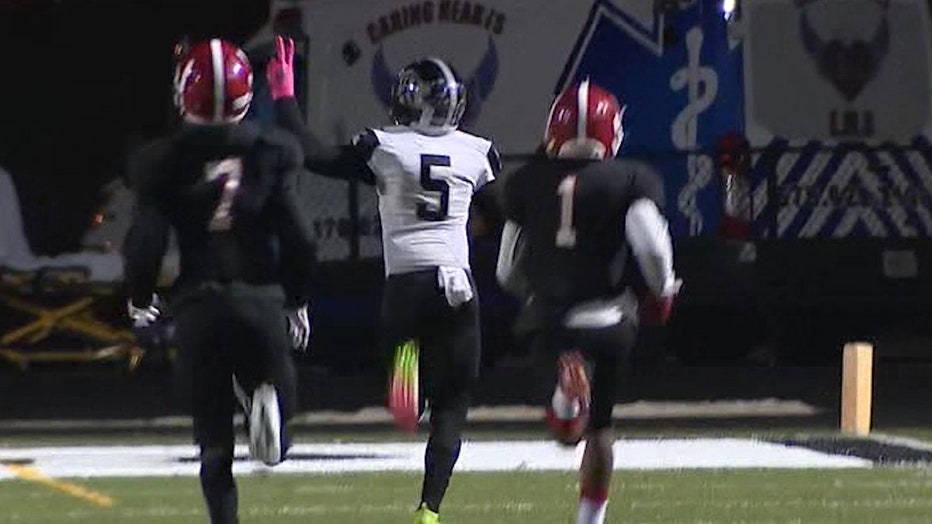 "I can't compare this team to any other teams I've had to be honest with you. There's so much talent at so many different spots, from our kicker all the way to our long-snapper. When I first got here there were a lot of individuals, I'm not going to lie, but those guys kinda bought in---they were used to losing. They were 1-9 when I took over, so my biggest thing was- how do I build a team?" said the coach.

Hackney started with the formula that helped him compile winning records at all but two of his past schools-selflessness.

"I can't really say there's one guy that stands out. A lot of teams have trouble defending us because you don't know who's gonna make the play. We haven't had the same Player-of-the Week yet...that just goes to show you the type of talent we have on this team and it's not a selfish talent," Hackney told FOX 5 Sports. "These guys really care about each other and helping each other perform to the top level. In this day and age that's kind of rare because we deal so much with the "Twitter Kids" that worry about who gets an offer and who doesn't get an offer. It's very hard to find kids that actually care about each other---enough to say, you know, 'I want to let some of my shine go to make sure you shine'."

The Raiders will have their chance to shine Thursday morning when Good Day Atlanta's Paul Milliken presents the team with "The Hand Trophy" during a live pep rally from Riverdale which starts in the 8 a.m. hour.