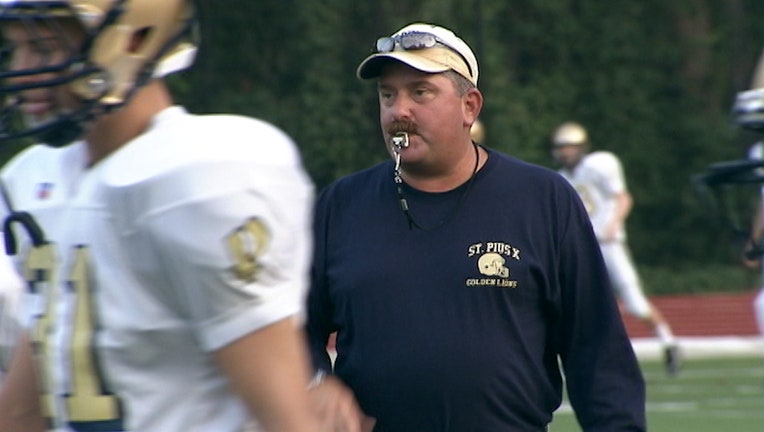 ATLANTA - St. Pius X football coach Paul Standard will be leaving the Atlanta school after 20 seasons as head coach. Standard confirmed with FOX 5 on Thursday that he will taking over as the new head coach of Gilmer County High School.

"When I got into coaching in 1985 one of my goals was to come back to my alama mater St. Pius X and I wanted to be the head football coach. I was influenced by my coach George B. Maloof. He is why I do what I do for a living. I've loved every minute of it. It's been a great twenty years. Tremendous support from our parents, our administration, the outstanding young men that I've had a chance to coach, and a great staff over the years," said Standard.

Standard only had one losing season in his twenty at Pius, now he moves to Gilmer County where the Bobcats don't share the same history of winning. Gilmer County has only won 7 games total in their last five seasons.

Standard coached in public schools for 16 years before getting the St. Pius job and another benefit to moving to Gilmer County will be adding to his retirement fund.

When thinking about his favorite memories of his time at Pius, first and foremost was breaking the 21 year drought that the Golden Lions had against arch rival Marist in 2003.

"We beat a great football team. Coach Chadwick and what he's done over his career is unparalleled. There was a quarterback on that team who is the current head football coach of the Los Angeles Rams, Sean McVay who was an oustanding player. We were fortunate enough to win and break that streak. Of course they went on to win the state championship," said Standard.  He also mentioned the team's 2006 win at Thomas County Central and a state semifinal win at Woodward Academy in 2014.

Standard's son Paul Standard III has served as St Pius' offensive coordinator and he will go with his father to Gilmer County to serve the same role there.