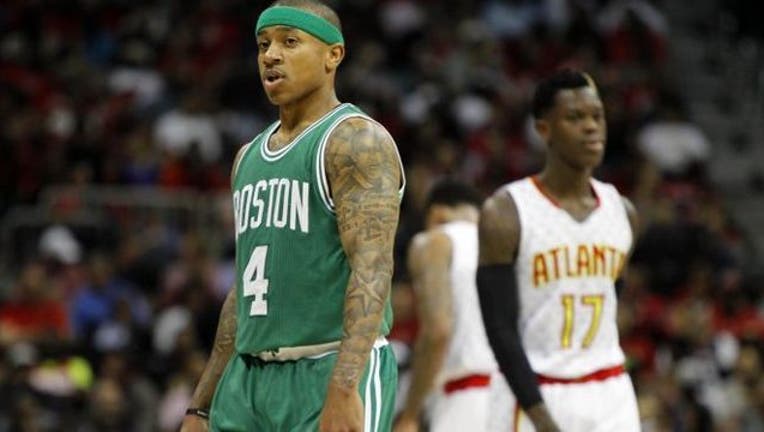 ATLANTA - Talk about a stunning turnaround.

The Atlanta Hawks couldn't make anything.

Then, suddenly, they couldn't miss.

Kent Bazemore got the Hawks rolling with three straight 3-pointers in the second quarter, letting out a scream after the last one dropped through, and Atlanta reclaimed the upper hand in its playoff series against the Boston Celtics with a 110-83 rout Tuesday night.

The Hawks had 19 points midway through the second quarter. Over the next 1 1/2 quarters, they poured in 70 on the stunned Celtics, the scoreboard looking more like a slot machine.

Asked if he had ever seen such a tale of two games, Kyle Korver shook his head and said, "Not in the playoffs, for sure. That's quite the turnaround."

After losing two straight on the road, the Hawks moved ahead 3-2 in the series and could close it out Thursday night in Boston.

If Game 7 is needed, it would be Saturday in Atlanta.

For a while, it looked like the Celtics might be heading home for a potential clincher. The Hawks made only six of their first 34 shots, the sellout crowd's moans growing louder with each miss. Boston pushed ahead 29-19 but wasn't exactly lighting it up, either, missing a chance to build a bigger cushion.

"We were struggling to make shots," coach Brad Stevens said. "Yeah, it was a little frustrating. But I'm thinking, `If we continue to guard like this, we have a chance."'

Turns out, they had no chance.

Coming out of a timeout in which mascot Harry the Hawk did a tribute to Prince and the arena was aglow in purple, the Hawks found their shooting touch.

Boy, did they ever go crazy.

Atlanta ripped off 11 straight baskets -- five of them from beyond the arc -- in a 28-8 run that put the home team in control before halftime. Mike Scott and Jeff Teague knocked down 3s before Bazemore swished three in a row in the space of about 90 seconds.

Just like that, the double-digit deficit turned into a 10-point lead.

Even though the run finally ended with Teague missing a shot at the halftime buzzer, the Hawks went to the locker room up 47-39. They didn't slow down a bit after the break, shooting 62 percent during a 42-point third quarter that turned the game into a rout.

Scott led the balanced Hawks with 17 points, while Bazemore and Teague had 16 apiece. Evan Turner topped Boston with 15 points.

"You get the crowd behind you, and then you make a few in a row," Bazemore said. "The rim gets bigger and bigger."

Celtics star Isaiah Thomas, who averaged 35 points in two victories at Boston that evened the series, managed only seven points on 3-of-12 shooting. He hobbled off to the locker room in the closing minutes with a sprained left ankle.

Thomas said it wasn't anything serious, and he expects to be ready to go Thursday.

There was no need to come back in this one, especially after the Hawks harassed Thomas all night with traps and double teams, making it clear they were going to put the scoring burden on the rest of the Celtics.

"It should be a sign of disrespect to my teammates," Thomas said. "Other guys have to step up and make plays."

The Hawks got a chance to rest their starters in the final quarter, too. Little-used players such as Kris Humphries, Kirk Hinrich and Lamar Patterson closed out the game for the home team.

Humphries, playing in the series for the first time, even knocked down a couple of 3s.

Thomas was booed by the Atlanta crowd every time he touched the ball, the fans still mindful of an incident in Game 3 in which the guard took a swing at Atlanta's Dennis Schroder.

The Boston star was assessed a Flagrant 1 foul but avoided a suspension when the league office reviewed the incident.

Former Hawks owner Ted Turner was among those sitting in the front row for Game 5.

Atlanta Falcons stars Julio Jones and Devonta Freeman were also in the house, along with several of their NFL teammates.

Hawks: All 13 players attempted at least one 3-pointer. ... Paul Millsap was held to 10 points coming off his 45-point effort in Game 4. ... Al Horford missed his first eight shots and finished with just six points on 2-of-11 shooting.