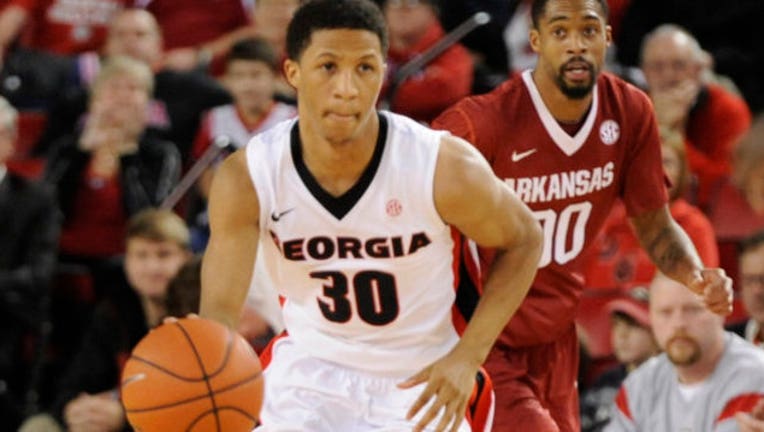 J.J. Frazier (30) during Georgia's game against Arkansas at Stegeman Coliseum on Saturday, January 18, 2014 in Athens, Georgia (Photo by John Kelley)

ATHENS, Ga. - J.J Frazier and Yante Maten received two honors on Tuesday for their play on the basketball court this season for the University of Georgia.

Both bulldogs were honored as first-team All-SEC selections and named to the U.S. Basketball Writers Association All-District Team.

“I am extremely happy for both J.J. and Yante to be recognized for the terrific efforts that they gave this season,” head coach Mark Fox said. “They have been incredibly selfless in their roles leading our team.”

Frazier and Maten were the first Georgia players to be named to the USBWA All-District team together since Jarvis Hayes and Ezra Williams in 2003.

“J.J. has had a remarkable career, and it is fitting that he is being recognized this way as a senior,” Fox said.

“Yante has obviously struggled being out with his injury, and I hope that this recognition eases that frustration,” Fox said.

Frazier and Maten were named All-SEC for the second-straight season. A year ago, both players were second-team picks of league coaches and third-team honorees by the Associated Press.