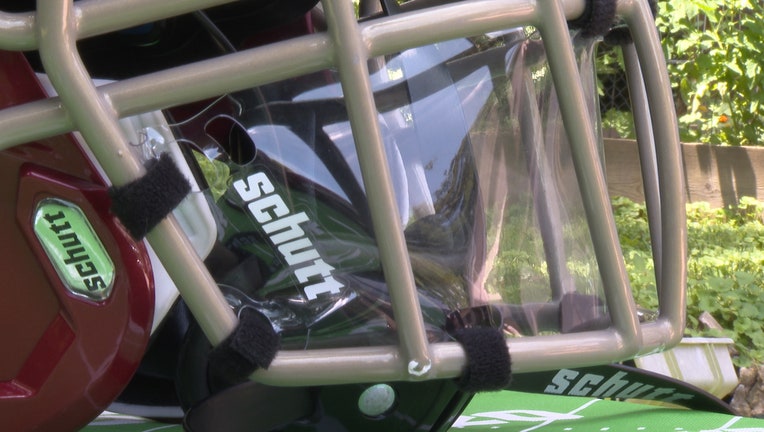 Football helmet safety has been a top concern for years, but for 2020 football the next step won’t be more padding, but something else.

“Vinyl and velcro strips. There’s an upper and a lower” said Klay Killingsworth with the football helmet company Schutt.

In early June the company released a “Splash Shield” to add to helmets.

The goal of these vinyl strips is to block players sweat, coughs and sneezes.

“Since we put them out there, there’s been a ton of requests to see them. Getting samples out to coaches, letting them put their hands on them and practice with them,” said Killingsworth.

South Paulding’s Jason Nash is one of those coaches.

These ‘Splash Shields’ are among the first of their kind on the market. The NFL has said they’re working with facemask shield maker Oakley on a similar potential solution.

And with anything added to the facemask of a player there comes questions.

“My concern was the breathability. Like how much air flow are the kids going to be able to get. Because here in Georgia, you play on turf, it’s 92 degrees outside but it’s 112 on the turf,” said Nash.

Killingsworth, Schutt’s representative for the state of Georgia, knew those questions were coming, so he put one on and went to cut his grass.

“Just walking around with it, doing yard work in it to see how it affects me. Once you wear it a little while, just a few minutes, you don’t even know that it’s there. Breathing ventilation was not affected at all,” said Killingsworth.

So will it do its job? Schutt said it’s original release that it will offer “some protection” for football players.

“It’s not 100 percent effective, but we want to eliminate some of the risk, just as we do with concussions,” said Killingsworth.

Nash says that South Paulding has not ordered any of the shields just yet. They are waiting on the green light that there will be a football season before they spend the money.

“Until we know for sure that we’ve got a season that we’re going to play, that’s just an extra expense right now that we can’t afford to pay. But if we do play then we’re going to have to pay for it,” said Nash.

Schutt will begin shipping the “Splash Shields” on July 1st. A package of three upper and three lower shields plus the velcro to attach them costs about $15.