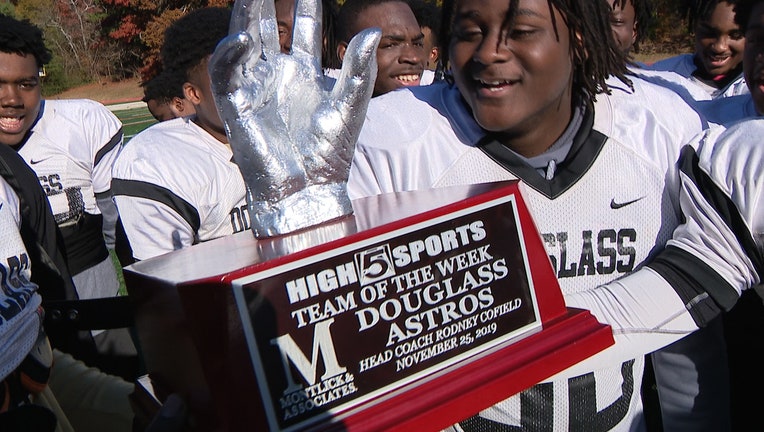 ATLANTA - With their first trip to the state quarterfinals since 1995, the Douglass High School Astros are the High 5 Sports Team of the Week!

They've earned a shiny new High 5 hand trophy, a tough matchup in the next round and a week's worth of practices during Thanksgiving break. No one, of course, is complaining.

"It feels great," said senior offensive and defensive lineman Isaiah Washington, "as you can see, the boys, they're smiling and happy to be here!"

The Astros are the lone traditional public school from Atlanta/Fulton County still alive in the playoffs. They fought hard to advance last Friday night on the road against Jefferson County, getting a late score to win 12-8.

This is Douglass' fourth straight season making the playoffs. Next up, they travel to face 11-1 Callaway High School, the champion of region 5-AA. The head coach's message to his team stays the same with another tough opponent waiting Friday night.

"Stay focused," said Cofield. "We're not going to deviate from what we're doing. We're going down to play a great team. We've been down there before, but we're bringing a different band with us this time."

Team of the Week – Douglas Astros