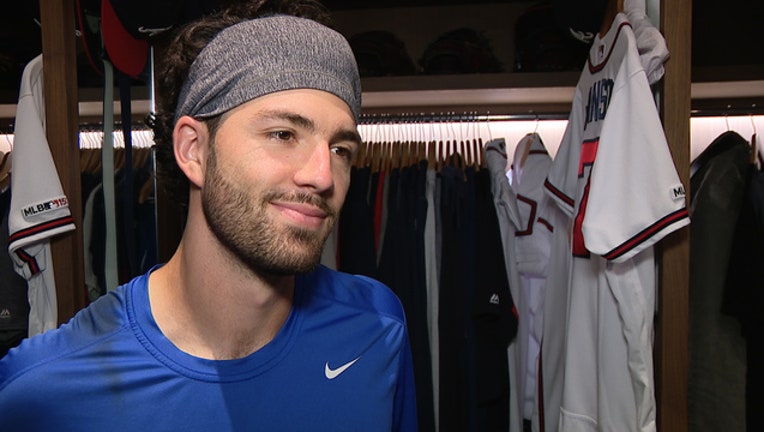 The Braves keep hitting homers and stretching their division lead. The Phillies keep giving up long balls - and this time it cost them a spot in the standings.

Ozzie Albies gave Atlanta the lead with a three-run homer in the third.

The Braves hit five homers overall, giving them a combined eight in winning the final two games of the three-game series.

"It doesn't change anything," Swanson said. "It's not how we look at the game. We just continue to go out and play our game."

The Phillies, who finished May with a three-game lead in the NL East, dropped to third place in the division, behind Atlanta and Washington.

"We don't have our heads down or anything," said Zach Eflin, who lasted only three innings, giving up seven runs, six earned. "We know how good we can be."

The Phillies scored four runs on six hits in the first inning off All-Star Mike Soroka, but the Braves charged back against Eflin. Soroka didn't allow another run while Eflin allowed two runs in the first, two in the second and three in the third.

Soroka earned praise after regrouping from the long first inning. "That might have been your best outing of the year," Braves manager Brian Snitker said he told Soroka when he walked to the mound in the fifth to take the rookie out of the game.

Phillies pitchers have given up 150 home runs, the most in the NL. The Braves have hit 140 homers to rank third in the NL. Atlanta took advantage of Philadelphia's weakness to quickly overcome the four-run deficit against Eflin (7-8).

"This level of play, we can't keep it going," said Phillies manager Gabe Kapler. "We've got to do a better job than this and the first thing we've got to get a handle on is keeping the ball in the ballpark."

Swanson started the comeback with a homer to center with one out in the first , and Nick Markakis added a run-scoring double. Swanson's double in the second drove in Ronald Acuña Jr. for the tying run before Albies' go-ahead, three-run shot in the third.

Freddie Freeman and Josh Donaldson hit back-to-back homers off Édgar García in the fourth, giving Atlanta a 9-4 lead. After Philadelphia cut Atlanta's lead to 9-6, Swanson hit a three-run homer off Austin Davis in the eighth. Davis was recalled from Triple-A Lehigh Valley earlier in the day.

Philadelphia's Sean Rodríguez hit a pinch-hit homer off Grant Dayton in the sixth.

Soroka, 21, was pulled one out before he could qualify for his 10th win. The rookie allowed four runs and nine hits with two walks in 4 2/3 innings. He will take a 2.41 ERA into the All-Star Game.

A.J. Minter (3-4) pitched a perfect seventh to earn the victory.

Phillies: RHP Juan Nicasio was placed on the 10-day injured list with a strained left groin. The injury was announced after Nicasio gave up three runs while recording only one out in Wednesday night's 9-2 loss. Kapler said the strain is "pretty mild." ... Kapler said Wednesday's exam on RHP Seranthony Domínguez (right elbow) "went really well."

Because the Braves won't need a fifth starter until after the All-Star break, RHP Bryse Wilson was optioned to Triple-A Gwinnett. Wilson, who allowed two runs in six innings in Wednesday night's win, is scheduled to be recalled to face Milwaukee on July 16. Dayton was recalled from Gwinnett.

The Braves' 140 homers are tied for the franchise record before the All-Star Game. The 2003 Braves also hit 140 homers before the break.

Every Braves infielder hit a homer in the same game for the first time in Atlanta franchise history, according to research provided to the Braves by STATS LLC. The last time every Braves infielder hit a homer in a game was Sept. 19, 1961, when the franchise was based in Milwaukee. First baseman Joe Adcock, second baseman Frank Bolling, third baseman Eddie Mathews and shortstop Roy McMillan hit homers.