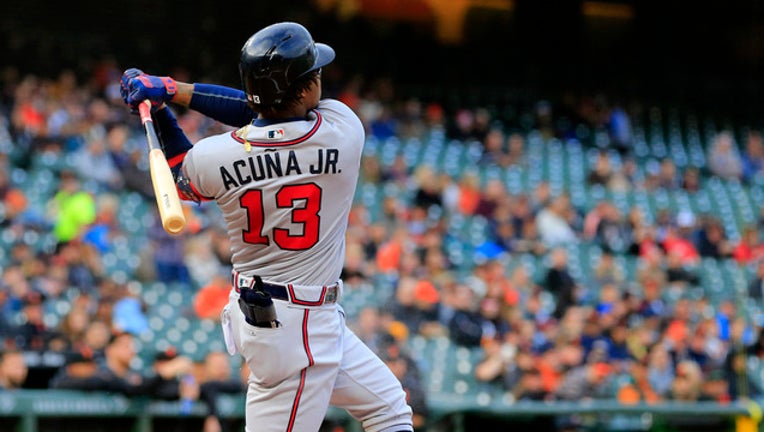 The Braves' rookie right-hander had his season delayed by a shoulder injury suffered working out in spring training. There will be plenty of time for All-Star talk, but the way Soroka is pitching, a strong case could be made.

"I'm really just trying to put one foot in front of the other and make every start," Soroka said. "All-Star break's a long ways away, and a lot of starts to go until then. I'm just going to keep doing what I've been doing. If that happens, it'll be unbelievable, [but] that's something that's not even worth thinking about right now."

Soroka (5-1) struck out seven and allowed one run and two hits in eight innings. The right-hander has allowed one earned run or fewer in all seven starts this season. His ERA rose from 0.98 to 1.01.

The 21-year-old Soroka retired the first 15 batters with relative ease before Brandon Crawford led off the sixth inning by hitting the first pitch to straightaway center field for a homer.

"The way he keeps pitching is something else," Braves manager Brian Snitker said. "The maturity shows. It's really impressive watching him work. He's one of those guys, you don't know if he's five up, five down or what the score is. He just keeps pitching and making pitches."

Atlanta second baseman Ozzie Albies helped preserve Soroka's gem, making a running catch with his back to the infield on a fly ball to short center field by Kevin Pillar that ended the fifth inning.

Austin Riley also homered for the Braves, who won the opener of a seven-game trip and have won eight of 11.

"It's nice because we have such a nice blend of young players and veterans," Acuña said through a translator. "It's nice to be a part of that. I'm just trying to focus on winning. That's really the most important thing that we're all striving to achieve."

Acuña homered again in the seventh off Nick Vincent. Atlanta is 8-2 since Acuña was moved into the leadoff spot on May 10.

"I don't know what it is, but he's just kind of a different guy there," Snitker said. "There's something about that spot there that he kind of comes alive."

Riley's two-run home run came off Suarez in the sixth, following a walk to Nick Markakis.

Suarez allowed three runs and four hits in six innings in his debut. The left-hander, who was called up from Triple-A Sacramento before the game, walked four and struck out five.

Suarez's only career win came against Atlanta on May 6, 2018.

"He was a strike away from a great start," Giants manager Bruce Bochy said. "He lost Markakis and then had the next hitter 0-2 and just hung a breaking ball. He gave us a chance to win the game, but offensively, we just got completely shut down."