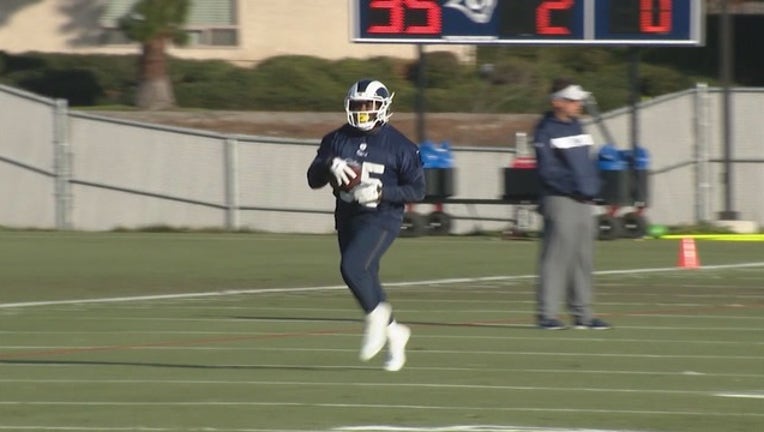 THOUSAND OAKS, Calif. (AP) - Todd Gurley is a serious sports fan who loves going to the Super Bowl each winter, attending all of the decadent parties and soaking up the game-day atmosphere.

The Los Angeles Rams' superstar running back will miss out on most of those wild parties this year in Atlanta, but he doesn't mind too much.

"I'm used to going to the Super Bowl, being with my boys, hanging out," Gurley said. "But we actually get a chance to play in it this year, so it's cool, man. It's a great feeling. We're all happy. I'm happy. It's no better feeling than how we're feeling right now."

The Rams (15-3) want Gurley to be more than a spectator against the New England Patriots, and they'll probably need much more from the 2017 Offensive Player of the Year than he was able to provide in his unusually quiet NFC championship game.

Gurley is not a boastful person in most public settings, but he is confident in his ability to finish the season with a bang. He also insists he doesn't mind if C.J. Anderson or somebody else does his job, as long as the Rams are all getting rings.

"We're all going to have our downs, but you enjoy it even more when you do something great, or you have that success," Gurley said. "I know who I am. I'm comfortable with myself. I'm the best. I'm the best at my position. I've been that way all my whole life, so it's like I'm going to keep striving. I know what I can do."

Nobody saw it in New Orleans, where Gurley made almost no impact on the Rams' 26-23 overtime victory. The highest-paid running back in NFL history touched the ball only five times, albeit scoring a TD on one of those touches, rushing just four times and failing to catch two of the three passes intended for him.

He was mostly a spectator down the stretch while watching Anderson, the veteran running back acquired by Los Angeles to fill in while Gurley missed the final two games of the regular season with a knee injury.

Unlike some elite running backs, Gurley has repeatedly said he doesn't care how many touches he gets as long as the Rams are winning. He appears to have a harmonious vibe with Anderson, who predicts a bounce-back performance by Gurley in the Super Bowl.

He also still remembers the Rams' miserable 4-12 season in 2016, when his ability was widely questioned. Being one part of a winning team is infinitely more appealing than being a star on a loser.

"This whole game is bigger than me," Gurley said. "It's not just about me. Why is Todd not getting the ball? Why is that? Because there's only one football and there's 11 guys."

Still, Gurley is a major reason why the Rams were in position to reach the Super Bowl in the first place, thanks to his latest outstanding regular season. He finished third in the league with 1,251 yards rushing and racked up an NFL-best 21 touchdowns, excelling as a runner and a receiver for the second straight year in Sean McVay's offense.

But Gurley's up-and-down form and usage since early December has been surprising and potentially troublesome for the Rams.

Although he was effective as a receiver, Gurley managed just 76 combined yards rushing in his final two regular-season games in early December before sitting out the Rams' last two games. He returned with a 115-yard rushing game against Dallas in the divisional playoff round, but Anderson put up 123 yards - and then Gurley barely factored in the Rams' game plan in New Orleans.

McVay has attempted to take the blame for this series of quiet performances by his franchise running back.

"Any time that you have a player like Todd Gurley on your team, I've got to do a better job of getting him involved and getting him into the flow of the game," McVay said this week, lamenting Gurley's lack of touches against the Saints. "That's something that I have to be accountable for."

But if McVay goes to Anderson early and often again in Atlanta, Gurley insists he won't mind watching another Super Bowl.

"You live for moments like that," Gurley said. "But like I said, you live, you learn. I don't give a damn what I do (in the game), honestly. I just want to win, so I don't really care. You always want to do good, but you just want to win."